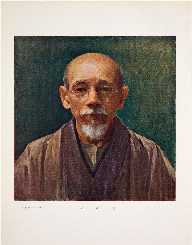 Asai Chu was born on July 22, 1856. He was a landscape painter. He was the greatest oil painter in Japan.

Asai Chu was born on July 22, 1856, in Kanto Region. He was born to a father who was a retainer of the Sakura clan. He attended a school in Sakura. In 1873, he went to Tokyo, Japan to study English. He later developed an interest in arts and studied under Shinkuro Kunisawa. Chu joined western oil painting classes while in Japan. In 1876, he joined the Technical Fine Arts School where he studied under Antonio Fontanesi, who was an Italian foreign minister. In the 1870s, he was appointed to introduce western oil painting to Japan.

In 1889, he founded the Meiji Art Society, which was the first group of western style painters in Japan. In 1898, he was appointed a professor of the Tokyo School of Fine Arts. Chu later went to France where he worked on his painting techniques. The government of Japan sent him to attend the Exposition Universelle where his work and that of other Japanese painters was featured. He transmitted the Art Nouveau Style to Japan. In 1902, he returned to Japan where he became a professor at the Kyoto School of Arts and Crafts.

The same year also saw him establish the Kansai Arts Institute. He also founded the Yutoen Group with some young artists. He also established the Kyoshitsuen group where he started working with a new sense of fashion. Artists who looked up to Chu established the Shogoin Western Art Research Centre and Kansai Bijyutsuin. He taught painters such as Suda Kunitaro and Yasui Sotaro among others. In 1907, he became the judge for the first national Ministry of Education sponsored art exhibition. He founded the Kyundo where his works with his original designs were created.