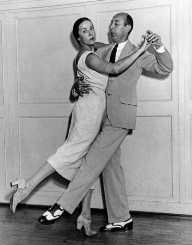 Arthur Murray was an American ballroom dancer, instructor, and entrepreneur. Born on April 4, 1895, he successfully established a chain of ballroom dance studios in about 50 countries becoming the most successful dance instructor in history. First acquiring the ballroom dance skills from a friend and later at the Educational Alliance.

Arthur Murray quit his job for further lessons and established himself as a great dancer. He later taught the act, and some of his students include, Eleanor Roosevelt, Johnny Mercer, actress Katherine MacGregor, Barbara Hutton, John D. Rockefeller and Duke of Windsor among several others. In 2007, he was inducted into the National Museum of Dance’s Mr. and Mrs. Cornelius Vanderbilt Whitney Hall.

Arthur Murray was born Moses Teichman on April 4, 1895, in Galicia, Austria-Hungary to Sarah and Abraham Teichmann. When he was two years, his mother migrated aboard the S.S. Friesland to the US, where they settled with his father in Ludlow Street, the Lower East Side of Manhattan.

Teichman was very shy growing up and self-conscious about his tall nature, which prevented him from playing with other kids and socializing. He learned his first dance moves at age 14 from a friend named Feigenbaum and later at the Educational Alliance.

Arthur Murray practiced the dance skills mostly at weddings where he found people of all size and height who were willing to dance with him. Teichman later studied at Castel under the instruction of Irene and Vernon Castle.

He later joined them as a member of the dance faculty where he taught dance moves like one-step, bunny hug, and grizzly bear. He enrolled at the Georgia School of Technology in 1919 to pursue business administration.

Acquiring dancing skill, Arthur Murray at the age of 17, started giving dance lessons at night while also working as a draftsman at the Brooklyn Navy Yard in the day. He was also a reporter at the New Haven Register. After graduating from high school, he taught on a part-time basis at the Grand Central Palace.

Arthur Murray later quit his work to take on dance instruction. He gave ballroom dancing instruction to patients from the Deveraux mansion Physical Therapy Clinic, in Marblehead, Massachusetts. In 1914 at age 19, he moved to Ashville, North Carolina where he continued teaching dance at the Battery Park. He changed his surname from Teichman to Murray during the outbreak of the World War I, and the anti-German sentiment in the US became prevalent.

Arthur Murray started establishing his chain of dance studios in 1920. During this period, he had cemented a credential as a reputable dance instructor and dance writer. He signed a deal with Columbia Gramophone Company, to produce a record for teaching dance. In Atlanta, Murray taught ballroom dancing at the Georgian Terrace Hotel.

He organised the first “radio dance” in 1920. Arthur Murray became a household name when he picked the then less-known dances, the Big Apple and Lambeth Walk, which he transformed into a dance craze and became very famous. He taught the two dances in hotel chains throughout the US.

As a successful instructor, Arthur Murray through a kinetoscope started selling dance mail by mail. He then moved to drawing and selling footprints, which dancers placed on the floor and followed to learn dancing. The business was initially successful but later declined. In 1925, he established a franchise of selling branded dance lessons.

Arthur Murray married his dance partner Kathryn Kohnfelder on April 24, 1925. The two first met at a radio station in New Jersey. The couple had twin daughters, Jane and Phyllis. Arthur Murray died on March 3, 1991, at the age of 95 in his Honolulu home.