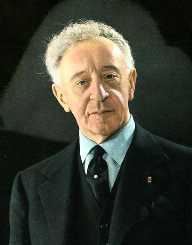 Classical pianist Art Rubinstein was born Artur Rubinstein on the 28 January 1887 in Lodz, Poland which at the time was a part of Russia. His parents were Izaak Rubinstein and Felicia Heiman, and he was the youngest of seven children. Both parents were Jewish, and his father was in the textile manufacturing business. As a very young child, he showed an interest in music and by four years of age, was considered a child prodigy.

Art Rubinstein's first piano teacher was Adolf Prechner in Lodz. When Rubinstein was seven years old, he was playing pieces by Mendelssohn, Schubert, and Mozart. His musical tuition continued under Aleksander Rozycki in Warsaw. Then when he was ten years old, he was sent to Berlin to study music at the Hochschule für Musik (1897).

At 13 years of age, Art Rubinstein made his debut with the Berlin Philharmonic Orchestra on the 1 December 1900 in the Beethoven-Saal. He played Mozart's Piano Concerto in A Major and Camille Saint-Saens; Piano Concerto in G to wide acclaim.

Ignacy Jan Paderewski took an interest in him, and Art Rubinstein visited him in Switzerland in 1903. In 1904, Rubinstein moved to Paris, France to further his career. He was introduced to the impresario Gabriel Astruc who offered him a contract which led to Rubinstein touring worldwide including the United States, the UK, and Russia. He also appeared in Warsaw with the Warsaw Philarmonic Orchestra. He visited South America during 1917-1918 and performed in Rio de Janeiro, Buenos Aires, Santiago de Chile, and Montevideo.

Rubinstein continued touring including the UK (1919) and the United States (1921). In the mid-1930s, he discontinued travelling to study and concentrate on his piano playing style. He resumed touring in the late 1930s and during World War II (1939-1946), he lived in Brentwood, California. Because of Benito Mussolini’s anti-Jewish laws (1938) in Italy, Rubinstein cancelled all Italian concerts. He left Europe in 1939 and settled in the United States. As a protest against the Nazi’s treatment of Jewish people, he vowed never to play in Germany again.

Art Rubinstein visited his homeland in 1958 and performed in Warsaw as well as Krakow. In 1960, he was appointed the Honorary Chair of the Jury of the 6th Chopin International Piano Competition in Warsaw, Poland. He also performed at the Warsaw Autumn International Festival of Contemporary Music in 1966.

And in 1975, he played Chopin’s Concerto in F Minor and Beethoven’s Piano Concerto in E flat major with the Lodz Philharmonic Orchestra marking the 60th anniversary of the orchestra. He gave his final concert at Wigmore Hall, London in May 1976, at the age of 89. Rubinstein visited his hometown of  Lodz for the last time in 1979.

Art Rubinstein's first wife was the Polish ballerina Nela Mlynarska whom he married in 1932. The couple had five children. During his marriage, Rubinstein had a daughter, Luli Oswald with Paola Medici del Vascello. When he was in his eighties, he had a relationship with Annabelle Whitestone and left his wife for her. The couple set up home in Geneva, Switzerland.

Rubinstein, who had become a US citizen in 1946, died on the 20 December 1982 at the age of 95. In 2007, Rubinstein’s family donated a collection of Rubinstein’s papers including original manuscripts which had been removed from his Paris home in World War II by the Nazis. The Berlin State Library returned Jewish property to legal heirs, and the Rubenstein family had become the rightful owners of 71 items.

His autographical works are My Young Years (1973) and My Many Years (1980). He was the subject of an Academy Award-winning documentary, Arthur Rubinstein - The Love of Life (1969). Rubenstein retired in 1976 after his eyesight began to fail.