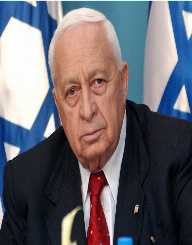 Israeli politician and general Ariel Sharon was born to Russian-Jewish parents on the 26 February 1928 in Kfar Malal, Palestine. Kfar Malal was Jewish settlement in Palestine at the time of his birth and under British control. His parents Samuel and Vera Scheinerman had arrived from Russia six years before Sharon’s birth.

At the age of fourteen, Ariel Sharon became a member of the Haganah, the Zionist militia. In 1948 at the inception of the Israeli he served as a soldier than a junior officer, becoming a platoon commander in the Alexandroni Brigade. The brigade engaged in many battles during the 1948 War of Independence, including Operation Bin Nun Alef. He was injured in the war. In 1953, Prime Minister David Ben-Gurion appointed Ariel Sharon as head of a new elite commando squad called Unit 101. This involved carrying out reprisal raids along the Jordanian border villages. A Unit 101 attack in Qibya, Jordan killed 69 residents, and some believe this was a partial cause of the Suez Crisis of 1956.

Tensions between Egypt and Israel remained high and when Egypt declared a blockade against Israeli ships through the Strait of Tiran, the Six Day War (1967) erupted. Ariel Sharon commanded an armored division and his conduct resulted in him becoming a military hero in Israel and a worldwide figure. A brave soldier, Sharon had built up a reputation for stubbornness and unpredictability, and some believe that this held him back from further advancement in the Israeli Army.

His nickname after the Six Day War amongst the general population was The King of Israel. By this stage, he was a Major-General and took credit for retaking Mitla Pass and Abu Agheila during the Six Day War. In 1971, he was involved in controlling occupied Gaza whereby 160,000 refugees were moved, and a hundred PLO suspects were killed and hundreds arrested. Ariel Sharon returned to the army during the Yom Kippur war. He took credit for crossing the Suez Canal and cornering Egypt’s 3rd Army by winning a tank battle.

Ariel Sharon was a member of the Liberal Party and was involved in working with the Herut Party under Menachem Begin to form the Likud political alliance.

Representing the Likud, Ariel Sharon was elected to the Israeli Parliament in 1973. In 1974 he resigned from the left the army and because he criticised fellow generals, his commission was canceled. Sharon then resigned from Parliament in late 1974, and Prime Minister Rabin appointed him to the reserve command Army where he served as a special counter-terrorism security adviser to the government (1975-1976).

Ariel Sharon formed, Shlomzion in 1977 which won two seats in Parliament in the 1977 election which saw the Likud alliance headed by Begin take control. Sharon was appointed Minister of Agriculture. In 1981, he became Minister of Defence. He was involved in the Israeli invasion of Lebanon in 1982, known as Operation Peace for Galilee and later as the first Lebanon War.

In February 1983, Ariel Sharon was forced to resign because of criticism into his involvement in members of right-wing Lebanese groups who carried out massacres at refugee camps in Beirut. A judicial commission of inquiry which investigated the 1983 killings was critical of Sharon and declared him unfit to keep his position as Defence Minister. Some members of the political spectrum labeled him The Butcher of Beirut. Ariel Sharon remained a minister, holding various positions. He was appointed Foreign Minister in 1998, and after his party lost the 1999 national election, he became party leader and head of the opposition in Israel.

He became Prime Minister in February 2001 when he defeated Labour Prime Minister Ehud Barak. In 2002 suicide bombings led to Sharon ordering the reoccupation of Palestinian cities. The Likud party went on to win the next election, and Ariel Sharon was again Prime Minister. In April 2003, he accepted America’s Roadmap to Peace for the region and agreed to Israel withdrawing from West Bank cities as well as releasing some Palestinian prisoners. However in February 2004, when he announced the withdrawal of troops from Gaza and the evacuation of the 22 settlements on the strip, the plan was rejected outright by Likud members. When all Jewish settlements in Gaza were dismantled in August 2005, many felt betrayed, and in November 2005 Sharon resigned from Likud and dissolved parliament. He then formed a new party, Kadima.

Ariel Sharon was expected to be re-elected Prime Minister, but he suffered a stroke which led to a series of health issues which resulted in him being in a coma for eight years and dying in 2014.

Ariel Sharon married Margalit Zimmerman in 1953, and the couple had one child, a son Gur. Margalit died in a car accident in 1962. In 1967, Gur died when he was accidentally shot by a friend when they were playing with a gun. Ariel Sharon married his wife’s sister Lily Zimmerman, and they had two sons Omri and Gilad. His second wife died in 2000 of cancer.