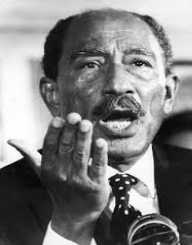 Anwar Sadat was a world-renowned politician and leader of the Arab Republic of Egypt. Before becoming the President, he was also a member of the military. Anwar Sadat turned from his anti-Israeli views to acknowledge that the country had a right to exist on its own. This step won him the Nobel Peace Prize but also, unfortunately, was the cause of his assassination.

Anwar Sadat was born as Anwar El Sadat to poor parents Anwar Muhammad El Sadat and Sit Al-Berain. They struggled to make ends meet while young Anwar Sadat was growing up. He had a brother Atef Sadat who grew up to become a fighter in the Yom Kippur war led by Anwar. In total, they were thirteen siblings.

Anwar Sadat was born on 25 December 1918 in Mir Abu Al-Kum, Egypt. He didn’t receive much education and went to study at the Cairo Royal Military Academy.  Being an interracial child, he was often bullied by his schoolmates.

Fresh out of the military academy in 1938, Sadat’s obvious progression was into the military. He stayed there for a few years and then slowly made his way into politics.

During this period, Anwar Sadat also established the Free Officers group and was a senior member.

Sadat’s political views made him popular with radical groups, and he sympathized with the Axis powers because they were fighting against Britain during the World War II. Slowly, he rose through the ranks and made his way to the Vice President of the Arab Republic of Egypt. After serving two terms, he became the 3rd President of Egypt in early 1971. Two years later, Anwar Sadat led the country in the war against Israel, also known as the Yom Kippur war.

Anwar Sadat was also the founder of the National Democratic Party and the Suez Canal Union. Slowly, he changed his views to acknowledge the right of Israel to be a separate country. For his efforts to mitigate peace, he was awarded the Nobel Peace Prize with the Prime Minister of Israel. However, this didn’t go too well with the radical Islamists in his own country.

Anwar Sadat ordered the arrest of nearly 1500 people who were causing unrest throughout the country only to aggravate the anger of the opposition.

Anwar Sadat admired Gandhi’s political views and wrote five books. The most famous one is his autobiography – In search of Identity.

During the victory parade on October 6, 1981, Anwar Sadat was seated on the stage when Khalid Islambouli, an army officer threw three grenades at him. Islambouli then proceeded to empty his assault rifle on Sadat’s body. The attack left 11 people dead.

Anwar Sadat was brought to the hospital where he was pronounced dead on arrival.

Anwar Sadat was married twice. His first marriage was with EhsanMadi, whom he divorced to marry Jehan Sadat.