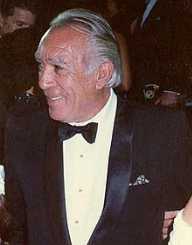 Anthony Quinn was born on April 21, 1915, in Chihuahua, Mexico.  At that time, the country was in the middle of a revolution.  The family moved to the United States while he was still a baby.  His parents were laborers in California.

Anthony Quinn had an interest in art and architecture.  In fact, Anthony Quinn was a student of Frank Lloyd Wright.  Wright encouraged his student's dream of becoming an actor.

Anthony Quinn started his acting career on stage in front of an audience.  His first play was in 1936 called “Clean Beds.” Anthony Quinn made movies in the 1930s and 1940s.

Some of his work at that time included the villains of ethnic origins in movies like Dangerous to Know and Road to Morocco.  The turning point for international fame started in his award-winning role in the 1952 movie Viva Zapata!.

The 1950s included roles in foreign films, namely Italian films such as La Strada.  Anthony Quinn won another award for his portrayal of artist Paul Gauguin in Lust for Life.

As Anthony Quinn established himself more as a powerful actor, he started to have more major roles in movies.  Notable movies during the 1960s included Requiem for a Heavyweight and Zorba the Greek.  In 1983, Anthony Quinn reprised the role of Zorba the Greek on Broadway in the musical Zorba.

Success did not come as easily for Anthony Quinn in the later years of his career, but he was still active in film.  His roles still contributed to popular films such as The Greek Tycoon, Revenge, Jungle Fever, and A Walk in the Clouds to name a few.

Anthony Quinn also wrote two memoirs in his lifetime:  The Original Sin and One Man Tango.

Anthony Quinn was married to Katherine DeMille in 1937.  Together they had five children.  The couple separated in 1965 due to his infidelity.  Quinn then married Jolanda Addolori in 1966.  They had three children during their union.

Anthony Quinn had a speech impediment.  He went to speech therapy, but his teacher Frank Lloyd Wright sent him to acting school to help him improve his speech.

Anthony Quinn was fascinated with art as early as six years old.  It was a hobby that stayed with him throughout his life.  However, when he was in his 80s, he worked more consistently on his paintings and sculptures.  He eventually exhibited his artwork around the world