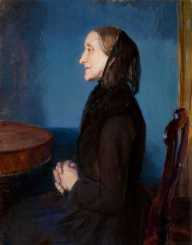 Anna Ancher was born on August 18, 1859. She was a Danish painter who was known for her incredible paintings. She was in a group of painters who drew much about Skagen and its Landscape. The group mainly consisted of men as she was the only woman in the group. She was the face of the female gender in the group. She would draw pictures that depicted women going about their household chores. She was not tied down by the constraints of marriage as her husband was also a painter. She was also involved in the interplay of colors in natural light.

Anna Ancher was born Anna Kristine Brondum on August 18, 1859, in Skagen, Denmark. She was born to Erik Andersen Brondum and Ane Hedvig Moller. Her father was the owner of the Bronduns hotel that was situated in Skagen. Many artists chose to settle in Skagen because it had a beautiful and cool landscape that encouraged painters. Anna was attracted to art at an early age because of the artists that were around her. Anna developed her artistic skills very fast and without difficulty. She only pursued an education in drawing. She studies for three years at the VilhelmKyhn College of painting in Copenhagen.  She also studied drawing at a workshop owned by Pierre Puvis de Chavannes in Paris, France. She learned a lot during her education that she developed her own style of painting. She was also among the first artists to observe the interplay of several colors in natural light.

In 1880, she married painter Michael Ancher whom she met in Skagen. The couple decided to settle in Skagen where they started and continued with their career in painting. Michael and Anna joined the Skagen Painters. Skagen Painters was a group that was dedicated to capturing the natural beauty and life of Skagen which was a fishing town. Anna painted the lives of the people who lived in Skagen. She was the only woman in the group as all the members of the group were men. She had overcome the custom of married women being labeled nothing more than housewives who took care of household chores. She was an accomplished painter who left behind a legacy to be remembered by many.

Anna is remembered at the chronicler of the womenfolk of Skagen. She painted the natural beauty of Skagen but also depicted the lives of women living in Skagen in her paintings. She used to draw paintings of women who were busy conducting or doing household chores. She would draw women cooking, knitting or reading among other activities. She also made paintings that depicted religious symbols. In the group ‘Skagen Painters’ she was the only one who was originally from Skagen. Her paintings reflected more of Skagen than the paintings of the other painters including her husband.

Skagen was her homeland, and so she knew almost everything about the small fishing town. Her paintings or works include ‘Blue Ane,’ ‘Grief’ and ‘The Girl in the Kitchen’ among so many other works that really depict her marvelous works. Her paintings and those of her fellow painters from Skagen are now featured at the Saxlid. The Saxlid if the Ancher family home in Skagen. Anna and Michael had one child, Helga Ancher.

In 1913, Anna was awarded the ‘Ingenio et Arti’ Medal for her contributions as a painter. In 1924, she was awarded a travel scholarship ‘Tagea Brandt Rejselegat.’ In 2004, (this was long after her death) Anna along with her husband Michael was featured on the front page of Danish Thousand Kroner Bill.