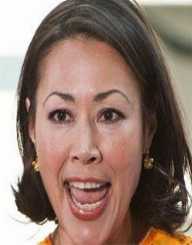 Ann Curry is an American journalist and correspondent who also served as the news anchor of The Today Show. She covered a variety of important news and interviewed famous figures of countries during her work as a reporter from Baghdad, Rwanda, Darfur, Sri Lanka, Congo, and Albania.

Curry also did the news coverage of the disastrous earthquake in Haiti in 2010 as well as the tsunamis that occurred in Southeast Asia.

She tied the knot with software executive Brian Ross in 1989. The married couple has two children named McKenzie and William Walker. Curry and her family currently reside in their home located at New Canaan, Connecticut.

Ann Curry was born in Guam on November 19, 1956, to Hiroe Nagasa and Bob Curry. Her mother was of Japanese lineage while her father was of mixed German, Scottish, French, and Irish descent and was a native of Colorado. His father who was a member of the US Navy met her mother while she was working as a conductor in the States during the Second World War.

Due to her father's line of work, Curry's family regularly relocated, and she ended up living in various places growing up. A part of her teenage and toddler years were spent in Japan, California, Oregon, San Diego, and Virginia.

Ann Curry attended Ernest J. King School in the US' Naval Base in Nagasaki then later transferred to Ashland High School where she finished her secondary education in Ashland, Oregon. Upon graduating from high school, she enrolled at the University of Oregon where she received her bachelor's degree in journalism in 1978.


The Start-Up at Journalism

In 1978, Ann Curry started working as an intern at KTVL who was affiliated with NBC back then. She worked her way up and became the station's first female news reporter and then relocated two years later in Portland to KGW where she served both as an anchor and reporter.

Curry left her career in Portland in exchange for moving into Los Angeles as a correspondent for KCBS-TV. Under the KCBS, she rendered six years of service from 1984 to1990 where she was awarded two Emmy Awards for her extensive work.

Curry at the NBC Network

One of the highlights of Ann Curry's career occurred when she signed a contract with NBC in 1990 as the Chicago reporter of the network. The following year in 1991, she worked as the anchor for NBC News at Sunrise until 1996. In 1994, she also served as Matt Lauer's substitute in the Today show until 1997.

In 2005, she served as Stone Phillips' co-anchor in Dateline NBC while consecutively working as the news anchor of the Today show until 2011. The following year on June 2012, Curry left the Today show due to the show's failing ratings. She was replaced by Savannah Guthrie the following month in July 2012.

At present, Ann Curry focused on television production. In January 2018, she partook in We'll Meet Again, a series made by her company that focused on people who are in search of other people who made an impact on their lives.