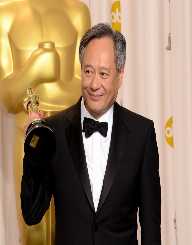 Ang Lee, Academy Award-winning film director, screenwriter and producer, was born on October 23, 1954. His birthplace was in the Chaozhou township of western Pingtung County located at Southern Taiwan.

Ang Lee attended the Provincial Tainan First Senior High School (presently National Tainan First Senior High School). He was required to pass the annual Joint College/University Entrance Examination to qualify for a University education according to the ROC’s rule. However, he remained unsuccessful in clearing the hurdle even after attempting twice to obtain the requisite qualification.

His father, who happened to be the principal of the high school where Lee studied, was sorely disappointed by the said failure of his ward. Lee then enrolled himself in the National Arts School to pursue a three-year degree course in arts.

Ang Lee graduated from there in 1975. The institute was later developed, reorganized and given recognition as National Taiwan University of Arts. He had to undertake the compulsory military service in Republic of China Navy (ROCN).

After the conclusion of his mandatory military service, Lee moved to the USA in 1979 and started pursuing a course in theater at the University of Illinois at Urbana-Champaign. In 1980, he earned a bachelor’s degree in theater from the said university.

His interest in arts and allied cultural activities like theater, drama, etc. blossomed during his early days in Arts School. His passion towards performing arts received a true motivational inspiration after watching one of the Ingmar Bergman films’ ‘The Virgin Spring.’

His father never wanted him to pursue a career in performing arts and instead wanted him to become a professor. However, Lee took his passion seriously and deviated from the prescribed path of his father.

Upon realizing the fact that being a Chinese, his English speaking capability including his pronunciation style etc. is not conducive for becoming an actor, Lee decided to focus on direction and accordingly enrolled at the Tisch School of the Arts of New York University to study a postgraduate degree course called MFA (Master of Fine Arts) in film production.

The award is New York University’s top recognition for exceptional attainment in film production. The film was later chosen for public broadcasting service. He made another 16mm short film, ‘Shades of the Lake’ in 1982 while studying at the NYU. The film secured the Best Drama Award in short film category in his own country of Taiwan.

After having earned his Master of Fine Arts degree in film production, Lee spent his next six years trying to convince the Hollywood Studio Executives about his potential in direction and as a screenplay writer. Initially unsuccessful, Lee participated in a screenplay competition promoted by the Government Information Office of R.O.C in 1990.

The two screenplays, ‘Pushing Hands’ and ‘The Wedding Banquet,’ he submitted as his entry to the competition, were declared first and second respectively by the concerned competent authority. The win caught the attention of two independent film production houses towards Lee, and they decided to sponsor and produce his movies.

After having received the necessary support after a long and frustrating struggle of more than six years, Lee’s debut directorial venture ‘Pushing Hands’ (1992) was a success both regarding box office and critics point of view.

The film received eight nominations in the Republic of China’s premier film festival, the Golden Horse Film Festival. Buoyed by the success, the producer of Lee’s first film decided to produce his second film too. Lee’s second film, ‘The Wedding Banquet’ was released in 1993 and was successful in winning the Golden Bear at the 43rd Berlin International Film Festival.

The film earned a nomination for both the Academy and the Golden Globe Award in the category of ‘Best Foreign Language Film.’ After the stupendous success of ‘The Wedding Banquet’, which received a total of 11 Taiwanese and international awards, Lee came to his home country having received an invite from his producer Hsu Li-Kong and made a film ‘Eat Drink Man Woman’ (1994) portraying the confrontation between the traditional values vis-a-vis modern relationships and the family conflicts arising out of this factor.

Again the film became a commercial success and also received rave reviews from the critics. The film was nominated as the Best Foreign Language Film for the British Academy Award besides being nominated for both the Golden Globe and the Academy Award for the second consecutive year in the same category. Lee won the Best Director Award from ‘Independent Spirit’ for ‘Eat Drink Man Woman,’ and the film won another five awards altogether.

Directing for the first time in a Hollywood movie, his 1995 release ‘Sense and Sensibility’ won the Golden Bear at the Berlin Film Festival for the second time in his directorial career besides winning Golden Globe Award for Best Motion Picture - Drama and an Academy Award for Best Adapted Screenplay (Emma Thompson). The film was nominated for another seven categories of Oscar Awards.

Ang Lee became the first Asian to have won an Academy Award in direction when he received the same for his 2006 film ‘Brokeback Mountain’. He earned his second Academy Award for best direction for his 2013 film ‘Life of Pi’.

Ang Lee married his molecular biologist wife Jane Lin on August 19, 1983. They together have two sons. A Buddhist by religion Lee is a naturalized US citizen. He presently resides in Larchmont, in Westchester County, New York with his wife in his family home.