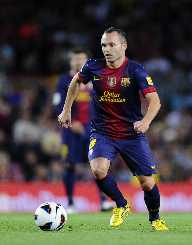 Andrés Iniesta was christened Andrés Iniesta Luján at birth in the sleepy village of Spain known as Fuentealbilla on 11th day of May 1984. His parents were known to have a working link with the then FC Barcelona top gaffer, Enrique Orizola. At the time Andres turned 8, he joined a local club in Albacete known as Albacete Balompié. By age 12, he was spotted by scouts when playing for his club during the Brunete Tournament.

Andres Iniesta's parents, however, persuaded Orizola to give Andres a pass to join the Barcelona Youth Academy. He journeyed with his parents and became an enrollee at the youth club. It was tough for Andres in those early years as he struggled to live far away from home.

At the time he progressed to the Under -15 team of Barcelona, Andres Iniesta became the captain of the team and led them to win the 1999 Nike Premier Cup. He also became the tournaments’ MVP after scoring the winning goal for his team. Iniesta progressed to the International scene in 2001 when he starred for his country’s Under-17 team. He was named in the Under-21 team in the next year. His display of mastery and brilliance and mastery with a ball made it practically impossible to overlook him. His calm demeanor notwithstanding, he remains a coach’s delight and a fan favorite.

Andres Iniesta arrived in world acclaim during the FIFA World Cup in 2010 as his country faced Holland in the finals. Andres slotted in the winning goal at an extra time to give his nation the FIFA Trophy. He was named runner-up to his Barcelona teammate, Messi in the Ballon d'Or Awards at year-end 2010. Andres Iniesta also became a part of Spain’s historic victory in three successive tournaments which was capped with the 2012 Euro nations tourney. He also became the Euro 2012 MVP as well as the UEFA Best Player Award for the year.

When he played at the FIFA World Cup in the year 2014, Andres ramped up his participation with his 100th national team cap when the last group match was played against the Aussies.

Playing at Barcelona seemed to be Andres Iniesta's life calling as he has known no other team since his teenage years. While playing the UEFA 2008 Nations Championship, he was named to the tournament’s first XI. In a couple of months after the continental glory, Andres was again at the pole position when he slotted home the winner against Chelsea during the UEFA Champions League last pairing. It was an unforgettable year as his club went back home that year to the Nou Camp with an unassailable six trophies.

During the pairing of the 2015 UEFA Champions League Final, Andres Iniesta was outstanding and was named Man of the Match as the game ended. Having captained Barcelona, he inevitably was part and parcel of the legendary run of the club that season.

Andres Iniesta was able to feature in 37 games out of the total 38 fixtures that Barcelona had during the league season ended 2005. This was a top record as no other player had such count.

Andres Iniesta has a range of skills that show his abilities with the ball. He delivers crisp passes, dribbles smoothly, and possesses such control and intuition that makes him a standout footballer. Andres's place as one of the most outstanding midfielders the game has ever known is cemented in the annals of the game. He got ranked as the No 9 best sports person in the globe. His follower count on Facebook is bursting at the 24 million mark. On the ball, Andres pushes forward to free the ball so that his strikers can go on the offensive. In the midst of such array of stars like Lionel Messi, Samuel Eto’o and Ronaldinho, this bundle of skills was more in the background in the decade to 2010. He became more visible after the 2010 world cup, and he has maintained the spotlight ever since.

While some buffs of the game say Andres Iniesta is not the most skillful of the players at the Barcelona side, his control of the passing artery made him indispensable. In many matches, Andre succeeded in making his opponents lose their bearing with his display of skillful play. His skills can be called brilliant and yet weird. It was commonly cited when Andre played for his national side against Ukraine during the March 2015 pairing how he dazzled. He ran rings around Tamas Stepanenko, who was tasked with stopping him but Iniesta left him sprawling on the ground. It was such a testament to his mastery of the game.

Andres Iniesta gave a hint of his mind work when in the field of play. He said once he gets the ball, he always looks up to locate his players that can make hay with the ball. He hinted that as a player, it is essential to be aware of who was lurking around if you must have deft control and accurate pass. Even when a player comes close, he said putting the touch to the ball is a step to move away and retain control. Whenever he held the ball during play, he says to make a run in front of the player and hold the ball closes up space and puts his team a foot forward.

Andres Iniesta got married to Anna Ortiz in the year 2012. She was his longtime date and eventually they had their daughter Valeria, a year after their wedding.