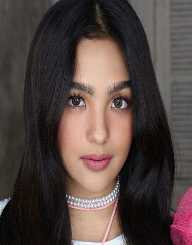 Anndrew Blythe Daguio Gorostiza is famous for her stage name Andrea Brillantes. She is a child actress who gained her star recognition after featuring in TV shows such as Annaliza and Goin' Bulilit.

Andrea Brillantes was born on March 12th, 2003 in Rizal, Philippines. She is the daughter of Mabel Gorostiza and Byron Gorostiza. When she was seven years old, Brillantes made her first appearance on TV by playing the role of Andrea Brillantes in the show Goin' Bulilit-2010. The same year, she landed another role in NBC production’s drama series called Alyna. This was a Philippine drama series revolving around the story of Alyna who had lost her daughter Sofia Alvaro; a role played by Brillantes.

In 2012, Brillantes featured in a sci-fi drama series called E-Boy. Around this year, she was also a guest star in several TV shows such as Wansapanataym, Ina, Kapatid, Anak, and Kahit Puso'y Masugatan.

Andrea Brillantes career turning point came in 2013 after featuring in Annaliza. This was a Philippine family drama series that she acted as Julie Benedicto. She played the lead role in the TV series. She played the role of a young girl who was being mistreated by her foster parents. Her remarkable performance earned her PMPC Star Award for being the Best Child Performer. The show was aired for three seasons before it came to an end in 2014.

Soon after the Annaliza show ended, Brillantes landed another lead role in Hawak Kamay-2014. This was yet another Philippine drama series which demonstrated the young girl’s skills in the TV industry. Recently in 2015, she featured in Pangako Sa 'Yo while playing the role of Lia Buenavista.

Since 2013, she has also been slightly active in the film industry as she featured in films such as MomZillas-2013, Crazy Beautiful You-2013, and Everyday I Love You-2015.

Besides the Best Child Performer award that she earned for her role in Annaliza, Brillantes won the Yahoo! Celebrity Awards in 2014. She was also nominated for the PMPC Star Awards for Annaliza. Moreover, she received a nomination for her role in the TV series Hawak Kamay at the 2014 ASAP Pop Viewers' Choice Awards.