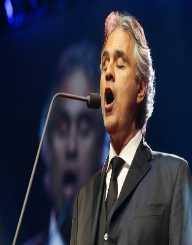 Andrea Bocelli is an Italian singer.  His interpretation of classical music has promoted its popularity to a younger generation.

That was when Andrea Bocelli started learning how to play instruments such as the piano, flute, guitar, and others.

Since birth, Andrea Bocelli had poor eyesight due to congenital glaucoma.  Andrea Bocelli lost all vision at the age of 12 because of an accident during a sporting game.  Despite losing one of his senses, it made his other senses more alert.  It did not take away from his musicality, but rather enhanced it.

Music was how Bocelli earned money while in college.  There were nights that he played at piano bars for some extra cash, often to pay for his music lessons.

In 1992, his demo tape of Miserere” to fellow Italian tenor Luciano Pavarotti impressed the famed singer.  He displayed a powerful voice that was touched with sensitivity.  They performed together with great reviews.

Andrea Bocelli was a classical singer, but he did not focus on singing in operas or strictly classical works.  He toured with Zucchero, an Italian rock star.  Andrea Bocelli would sing duets or solos for the concert attendees. With appearances at music festivals and competitions, he gains even more recognition in his country.  His first album Il Mare Calmo Della was released in Italy in 1994 following his successful wins.

His international acclaim came in 1999 with his album Songo.  It became the number one pop album around the world and sold more than ten million copies.  He was honored with awards and recognition that year. A more traditional album Sacred Arias also reached top rankings in his country of Italy as well as Canada and the Netherlands. The year 2002 was another record year for Bocelli.  The award-winning album Sentimento was produced along with the London Symphony Orchestra.

Andrea Bocelli has also been successful with holiday-themed albums.  Amore was released in time for the 2006 Valentine's Day. Fellow singer Christina Aguilera joined him for the duet “Somos Novios (It's Impossible).” My Christmas in 2009 was his first Christmas album and one of the top-selling albums of the year.  Love songs work in Bocelli's favor.  In 2013, he released an album of Mediterranean love songs in four languages. Passione included duets with Nelly Furtado and Jennifer Lopez.

In 1992 Andrea Bocelli married Enrica Cenzatti.  Together they had two children.  Andrea Bocelli and his wife were together for ten years before they separated in 2002.

Andrea Bocelli met Veronica Berti that same year.  They have a daughter together.  Veronica, who is also his manager, and Bocelli married in 2014.

Andrea Bocelli was born and raised in the Roman Catholic faith.  Andrea Bocelli was honored to perform before Pope Francis when the pontiff visited Philadelphia, Pennsylvania in 2015.  Bocelli has referred to St. Augustine who notes that singing is a form of prayer.

Andrea Bocelli has lent his voice to help charitable causes.  He has performed at benefit concerts around the world include the Memorial Concert at Ground Zero and the Music of Asia festival for the Indian tsunami appeal.