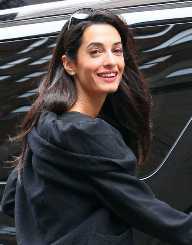 International human rights lawyer and activist Amal Almuddin Clooney was born in Beirut, Lebanon on the 3 February 1978 to Rami Alamuddin and Baria Miknass. Her father was a university profession and her mother a journalist. Clooney has a sister Tala and two half-brothers, Samer and Ziad. At the height of the civil war in Lebanon, the family moved to Buckinghamshire in England. In 1991, her father returned to Lebanon.

Clooney was a pupil at Dr. Challoner’s High School in Buckinghamshire. After winning a scholarship, she enrolled at St Hugh’s College, Oxford University, graduating with a BA in law (2000). After completing her degree at Oxford, Clooney enrolled at the New York University of Law and completed an LLM degree.

Initially, after qualifying, Clooney worked at Sullivan & Cromwell in New York City. She then did a judicial clerkship at the International Court of Justice in The Hague (2004). In 2010, she returned to London where she started working as a barrister at Doughty Street Chambers.

Amal Almuddin Clooney was introduced to the actor George Clooney in 2013. They were married in Venice, Italy in September 2014. The couple has twins, Ella and Alexander, born in June 2017.