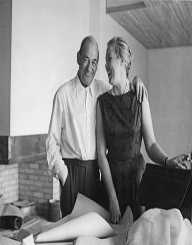 Alvar Aalto was born on February 3, 1898. He was a Finnish architect and designer. He was also known for painting and sculpting. He worked mostly with furniture, textiles, landscape and urban planning. He was a well known architect in Finland. He was known for his numerous paintings and art of architecture. He designed buildings and also designed them in the interior. He died on May 11, 1976.

Alvar Aalto was born on February 3, 1898, in Kuortane, Finland. He was born to Johan Henrik Aalto who was a land surveyor and Selly Matilda who was a post mistress. He was brought up alongside his two siblings. In 1903, his mother died when he was five years old. His father remarried and the whole family moved to Jyvaskyla, Central Finland. When he was still in school, he would accompany his father on his surveying trips. This experience was so much fun for him.

In 1916, Alvar Aalto graduated from the Jyvaskyla Lyceum. After he graduated he moved to Helsinki. He attended the Finnish School of Architecture, presently know as ‘The Helsinki University of Technology’, to take architecture. He was a very bright and good student as he got excellent grades in architecture. In 1918, he served in the Finnish National Militia during the Civil War. He later on graduated with a Degree in Architecture from The Helsinki University of Technology in 1921. He was a qualified architect then and so he set up his office in Jyvaskyla. He went ahead and hired an architect, Aino Marsio to work as his assistant. It was not long before the two got married and had their honeymoon in Italy.

Alvar Aalto started working when he was still a student at the college. He worked under the apprenticeship of Finnish architect, painter and professor, Armas Lingren. In 1920, he designed buildings for the ‘Tivoli’ region for the National Fair that year under Carolus Lindberg. In 1922, he designed the Congress Hall for the 1923 Goteborg World Fair.

Alvar Aalto did not design the Congress hall alone but with the collaboration of Bjerke. In 1927, Aalto and his wife moved to Turku. Later on that year he became number one for designing the ‘Southwestern Finland Agricultural Cooperative Building’. He was also the one who designed the ‘Paimio Sanatorium’. In 1933, he formed his own firm ‘Artek’. His firm was an architectural one and it dealt with matters touching on architecture. His firm began popular and he worked on projects internationally.

Alvar Aalto built and designed a lot of buildings throughout the world. His firm also sold furniture and other products which were imported. In 1938, he designed the most popular Villa ‘Villa Mairea’ in Noormarkku. He also built the ‘Muuratsalo Experimental House’ with the assistance of his second wife. After he died in 1976, his second wife, Elissa managed his business to the extent that all his unfinished works were completed.

In 1963, Alvar Aalto was awarded the Gold Medal from the American Institute of Architects.

In 1924, Alvar Aalto married Aino Marsio with him he had two children, a son and a daughter. The son was given the name Hamikar and the daughter Johanna Alanen. In 1949, he lost Aino to cancer. In 1952, He married his second wife, Elissa with whom he stayed married until he met his death in 1976. He died on May 11, 1976, in Helsinki, Finland. The Art Museum in Jyvaskyla was named after him. The museum is known as ‘The Alvar Aalto Museum’. This museum reminds many about his architectural skills and the many buildings that he built and designed globally.