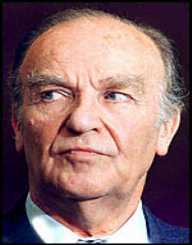 Alija Izetbegovic was born on August 8, 1925. He was a Bosnian politician and activist. He was the first president of the Bosnia and Herzegovina. He was the founder of the Party of Democratic Action.

Alija Izetbegovic was born on August 8, 1925, in Bosanki Samac, Northern Bosnia. He was born into a distinguished family. His family later moved to Sarajevo. He attended Sarajevo Law School. In 1940, he co-founded the Young Muslims organization. The organization assisted refugees during World War II.

In 1946, Alija Izetbegovic was arrested for participating in activist activities during the war. He was sentenced to three years imprisonment. He was later released and when on to pursue his studies. He obtained an LLB Degree from the Sarajevo University. After graduating from University, he remained active in politics. He published a manifesto that was known as ‘Islamic Declaration’ where he gave out his views as to the relationship between the society, Islam and the state. The publication was banned on allegations that it introduced Sharia Law in Bosnia. In 1980, he wrote the book ‘Islam between East and West.’ In 1983, his activist activities led to him being arrested along with some of his colleagues.

Alija Izetbegovic and his colleagues were sentenced to fourteen years in prison. The sentence was later reduced to twelve years. In 1988, he received a pardon which led to his release. The following year he co-founded the Party of Democratic Action. In the general elections, he was elected the President of Bosnia Herzegovina. In 1991, the Kingdom of Yugoslavia separated and this led to war. The war went on until 1994 even though Alija tried so hard to restore peace. In 1995, he and his enemies in Bosnia held peace talks on persuasion of the Internatonal Community. The peace talks were held at the Wright Patterson Air Force Base in Ohio. They agreed to end the way and Alija became the member President of Presidency of Bosnia and Herzegovina. In 2000, he retired from his post as President due to bad health.

Alija Izetbegovic married four times in his lifetime. His first wife had three children with him. He later married his second and third wives, Melika and Amira, under Sharia code of law. Later on he married his fourth wife whose name is not known to the public. He died in October 19, 2003 of heart disease in Sarajevo in Bosnia Herzegovina.

More People From Bosnia and Herzegovina