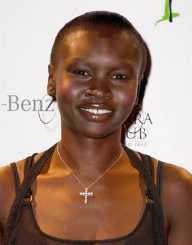 Alek Wek is a supermodel who belongs to the Dinka ethnic group in Sudan. She had to flee to Britain in 1991 to escape the civil war in Sudan. She started her modeling career in Britain and became famous as an African Supermodel.

She now lives in Brooklyn, USA. She is also known for her charitable work with the UN. She works to raise awareness of the plight of refugees worldwide.

Alek Wek was born on 16th April 1977 in Wau, Sudan. Her father Athian was an education official and her mother Akuol a housewife. She is the seventh of the nine children in the family. Her name means ‘The black and white cow” a tribal good luck symbol.

Alek Wek name is pronounced as Uh lek. She had to flee Sudan with her family because of the civil war in 1982.

The family moved to Khartoum. Her father died in Khartoum owing to complications of a hip replacement surgery.

After a short stay in Khartoum, she went to England without her mother. Her sister who had moved to England before the civil war applied for refugee status for the family. Alek and her sister were accepted first, and it was only after two years that her mother and two more siblings could join them in England.

Alek Wek had psoriasis - a skin condition which immediately disappeared when she came to England probably due to change in climatic conditions.

Alek Wek modeling career began in 1995 when Fiona Ellis a Models One scout spotted her at a London market in Crystal Palace, London.

In 1996 Alek Wek was signed to Ford Models based in New York. Within a year she was invited to walk in Ralph Lauren’s show. She has worked with many leading Fashion houses. She was ranked #14 by Chanel 5 on their list of “World’s Greatest Models.”

As An Exquisite Beauty

Alek Wek was dark skinned and long-limbed like her father. Dark skinned models were very rare in the fashion industry. She was the ‘first black model,’ and her exotic looks were appreciated.

Black women throughout the world celebrated Alek Wek success. Many others like the Kenyan actress, Lupita Nyong’o, were encouraged by her success.  People’s magazine featured her as one of “50 Most Beautiful People”.

Alek Wek has appeared in Oprah Winfrey’s Chat show and was a guest judge in America’s Next Top Model.

Alek Wek received “Best New Model” award at the Venus de la Mode Fashion model.She was the 1997 MTV model of the year and Model of the decade of i-D.Alek Wek was the first African woman to be featured on the cover of “Elle” magazine in 1997.

In 1999 she was photographed by Herb Ritts for a calendar. Her body was painted in bright, vivid colors by the artist Joanne Gair.

Alek Wek made her acting debut in 2002 as a Sudanese princess in the film “The Four Feathers.”

In 2002 she released an autobiography Alek: From Sudanese Refugee to International Supermodel.Alek launched “Wek 1933” a line of handbags in 2005. This is dedicated to her father who was born that year.

The designs are inspired by the brass clasp briefcase her father carried. In Sep 2007 she appeared on the cover of Ebony magazine with models Tyra Banks and Kimora Lee.

Alek Wek supports many charitable causes. She uses her popularity to spread awareness about the refugee crisis.

Alek Wek is an advisor to the US Committee for Refugees advisory council since 2002.
She is a missionary for World Vision, UNICEF and an ambassador for Doctors without Borders in Sudan.

Alek Wek returned to Sudan in 2012 with the UN Refugee Agency to highlight the stories of refugees and campaigned to rebuild the country.With Amarula, she was the face of their African Campaign Originals.