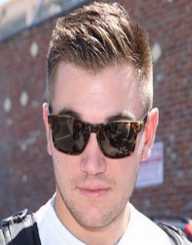 Aleksander Reed Skarlatos is an American actor and a US Army National Guard soldier. He is also a dancer. He has received many awards.

Aleksander Reed Skarloatos was born to a couple, Emanuel Skarlatos and Heidi Hansen on 10th October 1992 at Roseburg, Oregon, US. Emanuel was an immigrant from Greece. Aleksander had a step parents KarenSkarlatos and Tom Hansen. Aleksander studied at Fair Oaks, California where he befriended with Spencer Stone and Anthony Sadler.

They were friends in their grown-up age as well. Aleksander graduated from Roseburg High School. Alek Skarloatos and his friends came from a spiritual family, and their motto was to serve the community.

Aleksander’s higher up have referred to him as a real and courageous soldier. He was reappointed for an additional two years a month earlier to the extremist attack in France in 2015.

Alek Skarloatos along with two of his friends from Carmichael, California was on tour by train of Germany and the Netherlands and Greece. They had just then returned from Afghanistan.

They were traveling in Thalys train running between Amsterdam to Paris via Brussels. A Moroccan terrorist, assumed to be Ayoub El-Khazzani was traveling in the same car. He possessed an AK assault rifle and ammunition up to 270 rounds.

The attempts of the several passengers to overpower the terrorist failed. Spencer Stone, 25 years, friend of Alek Skarloatos, fought with the gunman and wounded. He attacked the gunman, succeeded in seizing the rifle and hit on the head until the assailant lost consciousness.

Alek Skarloatos and his friends got international recognition for their action in spoiling the attack. He and his friends, Spencer Stone, and Anthony Sadler got France’s highest honour, Knight of the Legion of Honour by French president Francois Holland and British businessman magnate Chris Norman.

During the presentation ceremony of the award, the President and the Interior minister acclaimed their gallantry. Prime Minister of Britain, David Cameron also praised their action

Alek Skarloatos and his friends were happy to receive the message of gratitude from the White House. US President Barack Obama personally talked to the three Americans and thanked them for their courageous actions. General Philip M Breedlove of the US Command in Stuttgart also thanked Skarlatos and his friends for their gallant action

Alek Skarloatos participated in the competition of Dancing with the Stars. Skarlatos joined with an expert dancer, Lindsay Arnold. Skarlatos and Arnold reached the finale and got the 3rd place. Some of the songs/dance were: Foxtrot “Ten Feet Tall”, Jazz/ “Don’t Stop Believin”, Quickstep/”American Girl”, Tango/ “Bad Things”, Paso Doble/ “Wake Me Up”, Rumba/ “Let It Go”, Jive/ “Jailhouse Rock”, Viennese Waltz/ “Haunted” Team Freestyle/ “Ghostbusters” and many more