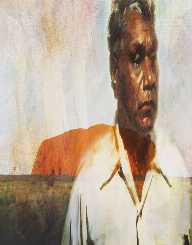 Albert Namatjira was a Western Arrernte speaking Aboriginal artist. He was taught and influenced by Rex Battarbee in painting watercolors.

He became very famous both nationally and internationally. He was the first Aboriginal to be granted restricted Australian Citizenship. He was also the first Australian Aboriginal artist to receive national acclaim from the white community.

Albert Namatjira was born as Elea on 28 Jul 1902 in a Lutheran mission near Alice Springs. Hewas given the name Albert when he was baptized on Christmas Eve in 1905. His parents too were baptized and gave up their tribal names Namatjira and Ljukuta for Jonathan and Emelia.

They were received into the Lutheran Church. Albert Namatjira attended the Hermannsburg mission and lived in the boys’ dormitory. At the age of 13, he returned to the bush for a ceremonial initiation. He spent six months and was exposed to the traditional culture of the Arrernte community.

This created in him a deep love and respect for his land. Albert Namatjira was interested in drawing from childhood and sketched scenes around him. He also made artifacts like boomerangs and woomeras.

Albert Namatjira worked as a camel driver and traveled extensively around Central Australia. He also took part-time jobs as a blacksmith, carpenter, stockman, etc. at the mission and neighboring stations.


Career As A Painter

Hermannsburg had many visitors, and this included painters who were attracted to the spectacular scenes of Central Australia. Amongst them were Rex Battarbee and John Gardner who held an exhibition in 1934.

Albert Namatjira was greatly impressed by paintings of his country and expressed his desire to learn. He acted as a guide and took Rex Battarbee to local scenic areas. He was a good and sharp student who learned and absorbed everything quickly.

Albert Namatjira was talented and developed a unique style and was able to combine both western style and native art.

Success As A Painter

Albert Namatjira held his first exhibition in 1938 in Melbourne. He later held exhibitions in Sydney and Adelaide. All his paintings were immediately sold out. Battarbee encouraged Namatjira and other Aranda artists. Battarbee also formed the Aranda group and was chairman of the Advisory Board. Namatjira continued painting for ten years and became very popular. He was the first to be included in ‘Who’s Who’ in Australia. Queen Elizabeth II was a great admirer of his painting.

In 1953 Albert Namatjira was awarded the Queen’s Coronation Medal He was elected an honorary member of the Royal Art Society of New South Wales in 1955.

Albert Namatjira had his unique style. His painting had a high quality of illumination through effective use of colors and contrasts. He depicted the geographical features but had the distinctive white gum tree in the foreground.

Some his famous paintings are the Central Australian Landscape (1936), Ajantzi Waterhole (1937), Red Bluff (1938) and Ghost Gum Helen (c1945 – 49). His painting of trees showed his love for them, and they were more portraits than landscapes.There were also critics who commented on the western influence in his paintings.

Albert Namatjira continued to be in touch with his roots despite his fame. The Arrernte tribe believed in sharing and soon he was supporting more than 600 people. Racial discrimination prevented him from owning grazing land and property.

However, in 1958, he was charged with supplying alcohol to Henoch Rabberaba a clan brother. There had been a drunken brawl resulting in the death of an Aboriginal girl Fay Iowa. Though Namatjira was not directly involved he was sentenced to six months which was later reduced to three following an appeal.

Albert Namatjira was a broken man and died in 1959 within four months of his release.

Albert Namatjira married a Kukatja woman named Ilkalita at the age of 18. He again shifted to Hermannsburg in 1923 and Ilkalita was christened Rubina. In 1928 he was ostracized because he violated the law of his people by marrying outside the kinship.