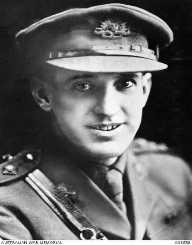 Albert Jacka was working for the Victorian State Forests Department when the First World War began. In September 1914, he enlisted. Assigned to the 14th Battalion, 4th Brigade, 1st Division, he did his training at the camp in Broadmeadows, a suburb on the outskirts of Melbourne.

His Division was sent to Egypt to defend the Suez Canal. They arrived in Alexandria at the end of January 2015. Ten weeks of training ensued, and during that time the 4th Brigade, together with two New Zealand brigades and the 1st Light Horse Brigade, were merged together and became the New Zealand and Australian Division.

Albert Jacka’s Division was then sent to Anzac Cove, Gallipoli. They landed on 26th April 1915, a day after the fighting started there. A section of the trenches being defended was captured by the enemy. When they tried to attack the section Jacka’s team was responsible for, all but Albert Jacka were killed or captured. Jacka then held the trench himself, killing seven Turkish soldiers, which caused the remainder of their party to retreat. Jacka received the Victoria Cross for his bravery.

After his bravery was reported in the papers, Albert Jacka became a national hero in Australia. He went from lance corporal to corporal, to sergeant and then to company sergeant major within the space of seven months. He continued fighting in Gallipoli.

In December 1915, allied troops began withdrawing from Gallipoli, and Albert Jacka’s Battalion was sent back to Egypt. Whilst in Egypt, Albert Jacka went through officer training, and in April 1916 was commissioned as a second lieutenant. The Australian Imperial Forces reorganized, and the 4th Brigade, 12th Brigade, and 13th Brigade were merged together to become the 4th Australian Division.

The next battle for Jacka was the Western Front in France. His Division arrived in June 1916. He was involved in numerous raids against the Germans and fought in different locations as required. His Division suffered over 5,000 casualties but still managed to capture Pozieres. On 7th August 1916, the Germans re-took part of the line, including Albert Jacka’s dug-out. Jacka came out of his dug-out after it was bombed, to find a group of Germans rounding up about 40 Australian soldiers.

Albert Jacka only had seven men available, but they took on the Germans and won. They re-took the line, and 50 Germans were captured. Albert Jacka was evacuated to England, and in August 1916, was promoted to lieutenant. In March 1917, he received another promotion, this time to captain. Jacka was sent back into battle. He was injured, but recovered and returned to battle.

After a second serious injury, Albert Jacka was retired from active duty in May 1918. After a long recuperation, he returned to Australia in September 1919. He retired from service in January 1920, and upon returning to Melbourne received a hero’s welcome. Albert Jacka and two other members of his former Battalion went into an import/export business together, but the business didn’t survive the Great Depression in 1931. In 1929, Albert Jacka was elected to the Council in the City of St Kilda, and in 1930, became the Mayor.

In January 1921, Albert Jacka married Frances Carey, in St Kilda, Melbourne. She was a typist from his office. The couple adopted a daughter named Betty.

Albert Jacka was only 39 when he died from his war injuries. He fought fearlessly in several major battles, including Gallipoli, the Western Front, the Battle of the Somme and the Battle of Pozieres, amongst others. It is due to the brave actions of soldiers like Albert Jacka that Australia has the freedom it does today. There is no greater legacy.

There are several landmarks named after Albert Jacka, including Jacka Park in Wedderburn, Jacka Boulevard in St Kilda, and the suburb of Jacka in Canberra, the capital city of Australia.