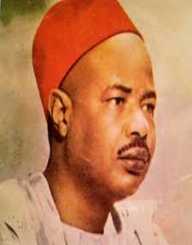 Ahmadou Ahidjo was highly known as the first leading President of Cameroon from 1960 till the end of 1982.For over a decade, Ahidjo made sure that he has taken the first place in everything he did. As a result, he got a seat as the first East Cameroonian Prime Minister. But before his fame called, Ahmadou proved that anyone could come out of struggles and defeats. It wasn’t by his might that he got himself up the ladder, but the strength of character was his best cup of tea. Let’s see whether he improved the well-being of Cameroonians during his tenure.

On 24, August 1924 Ahmadou Babatoura Ahidjo was first seen in the world in Garoua village, Cameroon. His mother was one of the Fulani people who served as a Fulani slave. His father governed the Fulani people as village chief. In spite of living an impoverished life, Ahmadou was sent to a local school by his mother. The village school was known as Quranic School, a Muslim Institution. But Ahidjo didn’t have a knack for study hence he dropped in the middle. To be precise, he withdrew from school at 14 years of age where he landed a veterinary work. After a year, he joined Ecole Priamaire Superieure School in Yaoundé, Cameroon.

When Ahmadou Ahidjo completed his early education, he landed another job. He was officially required to operate on or repair radio transmitters and telegraph. His job made him travel far, and it was in the middle of all that he met with a massive network of friends. It was also in the same experience that he embraced intelligence to govern the Cameroonian.

In the mid of 1940s, at 22 years of age Ahidjo argued with a famous political slogan: ‘Politics being a dirty game.' It was here that he joined the world of politics where he was positioned as one of the Cameroonians assembly team. For another three years, he found himself working as a Cameroon representative in Paris.

Early in 1957, he worked as the Deputy Prime Minister as well as the Minister of Interior. The following year, Ahmadou Ahidjo opted to launch his party Cameroonian Union the CU. After a short while, he was selected as the first Prime Minister.
In 1960 Cameroon was declared an independent country and Ahmadou took a chance to vie for The Presidency. It was here that he was selected as the first President of Cameroon. The following year, he made a peaceful treaty with British Cameroon. At the end of it all, the terra firma was declared as the Republic of Cameroon. Ahidjo’s party was then named as the Cameroon National Union which in turn became the only public party.

It was in 1965 to 1980 that Ahidjo was re-elected as the Cameroonian President. But he was happy and at the same time feeling oppressed. In the course of his tenure, he wanted the Muslims to form peaceful treaties with English Christians. His efforts were half-dead since he overwhelmed the two regions to the point of causing havoc between them.

In 1975 Ahmadou Ahidjo selected his longtime ally, Paul Biya to act as his Prime Minister. However, he shocked his country by announcing his retirement where he named Paul Biya as the next statesman. Rumors started to sprout from every corner, claiming that he was suffering from a serious illness. After a long silence, he toured Cameroon at the beginning of 1983 where he supported Biya’s presidential seat. Afterward, he went to France.

In the mid of 1983, Ahmadou Ahidjo started to declare his Presidential seat where he consistently argued and criticized Biya’s government. In an attempt to defeat his ally, Biya won the fight where Ahidjo was sent to exile in France. Biya continued to rule as the second President of Cameroon and Ahidjo spent more years in exile till the time he met his death.

Ahmadou Ahidjo married Germaine Ahidjo. The couple was blessed with four children: Babette, Mohammadou, Aminatou and Aissatou Ahidjo. It was on 30th, November 1989 that he was announced dead in Dakar Senegal. In his honor, a famous stadium in Cameroon was named after him.