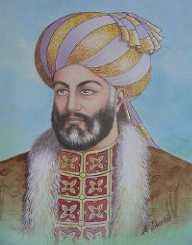 Ahmad Shah Durrani is known in history as one of the prominent military leaders during the latter half of the 17th century. Durrani is also known as the founding father of what is now known as Afghanistan. He had two known partners in the course of his life; Hazrat Begum and Iffat-un-Nissa Begum.

Historians and scholars have estimated that Durrani was born in 1772 and is alternatively known as Ahmad Khan Abdali. His father, Mohammad Zaman Khan served not only as the Governor of Herat but also the chief of the Abdali tribe. His mother was a woman named Zarghuna Alakozai and a brother named Zulfiqar.

Durrani's involvement towards political matters came to when he was captured as one of the political prisoners by the Ghiji ruler of the Kandahar region named Hussain Hotak. At the same time, Nader Shah, a prominent military figure, has been on the rise with a growing army. Shah's conquest eventually freed Durrani along with his brother when Shah conquered Kandahar in 1738. The brother's worked under his administration with his brother rendering service as Mazandaran's governor while Durrani became one of Shah's personal attendants or a yasawal.

He proved to be an excellent addition to his accolades since he rose in ranks from personal attendant to commandant of the Abdali Regiment. The regiment itself consisted of four thousand men that were part of the Mughal Empire invasion that happened in 1738.

When Nader Shah was assassinated in 1747, he was unanimously hailed as the new leader of the Abdali troops. By assuming the title of royalty, he was therefore made as Afghanistan's sovereign ruler.

From 1748 until 1767, he repeatedly invaded the Mughal Empire for a total of 7 times and conquered the lands of Peshawar with no oppositions. He has made a conquest in various countries and even went as far as Central Asia.

Besides his involvement in military conquests, one of his other passion lies in poetry. He is known to have written a number of odes in Pashto, his native language. Durrani also has a number of poems credited under his name in the Persian language.