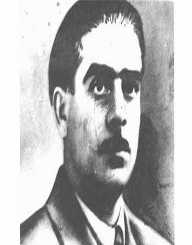 Ahmad Javad had a mostly informal education, learning most of what he knew at home instead of in a school. One of this many claims to fame is that he was fluent in more than one language. He knew how to read and write in Arabic, Azerbaijani, Persian, Russian, and Turkish. It wasn’t until Javid was in his late teenage years that he joined a seminary to get a formal education. He graduated from this school when he was 20 years old.

After leaving the seminary, Ahmad Javad became a teacher. He did not stay at the post for long, as he joined the Turkish army to fight in the Balkan War.

After the Balkan War, Ahmad Javad began to focus on writing poetry. His first collection of poetry, titled Goshma, was published in 1916.  His next work of poetry, titled, Dalga, was published in 1919. Not all of the Javad’s poems were well-loved. One of this poems, titled Goygol, was so controversial at the time that it ended up getting him arrested.

Ahmad Javad is most famous for writing the lyrics for the Azerbaijani National Anthem. However, the Democratic Republic of Azerbaijan was only a nation for a few years, from 1918-1920. When the republic in 1991, Javad’s lyrics became the national anthem once more.

Some of Javad’s other famous works are listed below.

To the Azerbaijani Flag

In 1920, Javad resumed his teaching career. He worked in Gusar Rayon, a village in Azerbaijan. He slowly worked his way up the ranks in the school system, eventually becoming a headmaster as well as a teacher. Also in 1920, he became the branch manager for the school. He worked in this post until 1922.

In 1922, he returned to his studies, but he kept teaching at the same time. He studied that the Pedagogic Institute. There, he learned about history and philosophy. Around the same time, in 1924, he joined the Union of Soviet Writers of Azerbaijan. He was the secretary of the group-- a post he held until 1926. In 1927, he completed his studies at the Pedagogic Institute.

Ahmad Javad moved to Ganja in 1930. There, he was a teacher once more. He worked at the Ganja Agricultural Institute. He started as a simple teacher, but was later promoted to a professor, and then promoted once more to the head of two of the language departments (Azerbaijani and Russian) at the school.

In 1934, he left teaching to become a translator/editor at the Azernashr Publishing house. While there, he translated many famous works by great authors like Shakespeare. He later left this job to become the head of a documentary section of the Azerbaijanfilm film studio.

In his lifetime, Ahmad Javad was arrested three times. He was arrested for the final time in 1937, as he was accused of being an enemy of the people, which meant that he was close to people who were not apart of the Soviet Union. He was executed by shooting on October 18, 1937. He was 45 years old at his time of death.