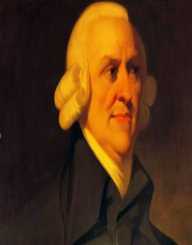 Adam Smith was born on 16th June 1723, to Adam and Margaret Smith in the County of Fife, Scotland. He was born in the town of Kirkcaldy. His father was a senior solicitor, advocate, and prosecutor.

When he was 14, Adam Smith began to study at the University of Glasgow. He studied moral philosophy and developed a keen interest in liberty, reason, and free speech. In 1740, he received a scholarship for postgraduate studies at Balliol College, Oxford.

He lamented the teaching at Oxford, which was not at all stimulating on an intellectual level. He did make good use of the library though, reading avidly, and teaching himself several new subjects.

Towards the end of his time at Oxford, Adam Smith periodically suffered from shaking fits. It is thought it may have been due to a nervous breakdown. Smith did not complete his scholarship at Oxford and returned home.

In 1748, sponsored by the Philosophical Society of Edinburgh, Adam Smith started doing public lectures. One of his lecture subjects was rhetoric, others included, ‘the progress of opulence.’ He wasn’t an exceptional public speaker, but Smith’s lectures were found very interesting and were very successful.

He was appointed as a professor at Glasgow University in 1751, as a teacher of courses on logic. In 1752, he was admitted as a member of the Philosophical Society of Edinburgh.

For the next 13 years, Adam Smith worked as an academic and was very happy during this period. It was during his academic years that Smith published the first of his major works, The Theory of Moral Sentiments. Smith became so well-known and popular due to the book, that students from all over the world came to study with him.

After publishing The Theory of Moral Sentiments, he turned to the subjects of law and economics for his lectures.

The University of Glasgow bestowed the title of Doctor of Laws upon Smith in 1762.

In 1763, Adam Smith was given the opportunity to tutor the Duke of Buccleuch, Henry Scott, which he accepted. It meant resigning from his professorship, which he did. The tutoring position was not only teaching numerous subjects but also touring Europe in the process. The payment was also far higher than it had been when he had been teaching.

He travelled to France and Geneva, and while in Geneva, he met with the famous philosopher, Voltaire. In France, he met with great minds such as Benjamin Franklin, Helvetius, and Francois Quesnay.

The Duke’s young brother died in 1766, and Smith’s tenure as tutor finished soon after. He returned home to Scotland. Over the next ten years, he spent most of his time writing his other major work, The Nature and Causes of the Wealth of Nations. It was published in 1776.

In 1778, he moved into Panmure House, located in Edinburgh, with his mother. He took up the position of Commissioner of Customs in Scotland. When the Philosophical Society of Edinburgh received its royal charter five years later, Smith became one of the founding members of the Royal Society of Edinburgh.

Adam Smith had two very prominent friends who were the literary executors of his will. One was Joseph Black, physicist, and chemist, and the other was James Hutton, a geologist. He left instructions that his notes and unpublished works should be destroyed, as he was disappointed that he didn’t achieve more with them. There were two exceptions – History of Astronomy, published in 1795, and Essays on Philosophical Subjects.

As with most philosophers and academics, Adam Smith had a vast library. He left his books to Lord Reston, the son of his cousin, who lived with him. Lord Reston divided the library between his two children. Mrs. Bannerman bequeathed her portion, in its entirety, to New College, Edinburgh. Mrs. Cunningham, on the other hand, sold some of the books, and the remainder went to the library at Queen’s College in Belfast.

While critics proclaimed the book as his best work, Adam Smith thought his first book, The Theory of Moral Sentiments to be his best work. This book was published earlier, in 1759.

1773: Elected as a Fellow of the Royal Society of London

1775: Elected as a member of the Literary Club

Adam Smith was heralded as one of those thinkers in the time of the Scottish Enlightenment – a period of significant intellectual and scientific accomplishments during the 18th and 19th centuries. The areas that had significant advancement were philosophy, law, chemistry, medicine, and the political economy, amongst others. Scotland and its improvements were very highly regarded at the time.

His most influential work, The Wealth of Nations, was the ‘go to’ work for the academic sector studying the science of economics. It has been listed in the 100 Best Scottish Books of All Time.

1976 was the bicentennial anniversary for The Wealth of Nations, and it once again put Smith’s works into the limelight. Both his major publications are now seen as being equal.