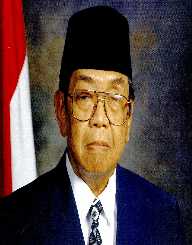 Adam Malik was born on July 22, 1917. He was an Indonesian Politician and one of the pioneers of journalism in Indonesia. He was the third vice president of Indonesia. He also served as a senior diplomat where he pushed so much for Indonesia’s independence. He also served as Foreign Minister for the Indonesian Government for eleven years. He became a revolutionary at the age of seventeen. He dedicated his life to the development of his country. He died on September 5, 1984.

Adam Malik was born on July 22, 1917, in Pematang Siantar, North Sumatra, Dutch East Indies. He was born to Abdul Malik Batubara and Salamah Lubis who were Muslims. He attended a Dutch Primary School and a Muslim Religious School for his primary education. He started working as a shopkeeper immediately after finishing Junior High School.

Adam Malik became interested in politics when he was a teenager, and so he became the chairman of the Pematang Siantar of the Indonesian party, Partindo. He was only seventeen when he became chairman. He campaigned for the independence of Indonesia from the Dutch colonial government. His campaigns led to his imprisonment because he defied the Colonial’s Government ban on political assemblies.

After Adam Malik was released, he became a journalist at Jakarta. He wrote articles for Partindo’s Party Magazine and Pelita Andalas Newspaper.  In 1937, he founded the Antara Press Bureau. At the beginning of 1940 to 1941, he served as a member of the Executive Board of the Gerindo Party. In 1945, he joined the Persattein Perdjoeangan, a movement that was formed to maintain Indonesia’s Independence. He also served as the Third Deputy Chairman of the Indonesian Central National Committee. He was also a member of the Committee’s daily executive board.

In 1964, Adam Malik participated on the Indonesian delegation to the first United Nations Conference on Trade and Development that was held in Geneva. In 1965, he was appointed the Minister for the Implementation of Guided Economy in Sukarno’s Cabinet. He served as the Minister of Foreign Affairs from 1966 to 1977. He was also the chairman of the Indonesian delegation to the General Assembly sessions since 1966. In 1971, he was appointed the president of the United Nations General Assembly. He became the chairman of the People’s Consultative Assembly in 1977. In 1978, he was elected as the third vice president of Indonesia in Suharto’s cabinet. He served as vice president until 1983 when he was replaced by Umar Wirahadikusumah.

In 1982, Adam Malik was honored the ‘Dag Hammarskjold Award’ by the United Nations. He was also honored ‘National Hero of Indonesia’ by the Indonesian Government. The award is regarded as the highest title of Indonesia.

Adam Malik was married, and from the marriage, he had five children, four sons, and a daughter. He died on September 5, 1984, in Bandung, West Java. He died from liver cancer. He body was interred in Kalibata Heroes Cemetery, Jakarta.