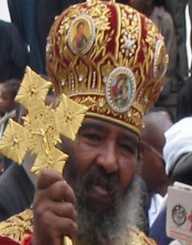 Abune Paulos was born Gebre Medhin Wolde Yohannes on 3 November 1935 at Adwa, Tigray Province, Ethiopia. When he was six years old, he was sent to the Abba Garima Monastery as a trainee deacon with the intention of becoming a monk and a priest.

Upon his return home, Abune Paulos and four others were appointed bishops, and it was around this time that he was given the title Abune Paulos. The new government in Ethiopia arrested the five bishops. The church leader was executed while Paulos and the other bishops were imprisoned until 1983.

As soon as Abune Paulos was released, Paulos left for the United States to complete his doctorate at Princeton. When the government changed in 1991, Paulos returned home and was subsequently elected the fifth Abuna and Patriarch of Ethiopia the Ethiopian Orthodox Tewahedo Church in 1992. He was elected one of the seven servicing presidents of the World Council of Churches in 2006. Paulos worked with relief organizations and charities involved in helping war refugees and citizens devastated by drought. He was also actively involved in the peace and reconciliation process involving Ethiopia and Eritrea.

In 2000 Abune Paulos was awarded the Nansen Refugee Medal by the United Nations High Commissioner for Refugees in recognition of his role.