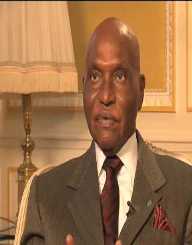 Abdoulaye Wade was born 29th May 1926, in Kebemer, Senegal. He did his secondary school studies in Senegal, but was awarded a scholarship to study in France.

In France, he studied law at the lycee Condorcet. After graduation, he remained and taught law at the same school for a period of time. In 1970, Abdoulaye Wade was awarded his Ph.D. in Law and Economics from the Sorbonne.

In 1974, Abdoulaye Wade attended the Organization of African Unity summit in Mogadishu. He spoke to President Leopold Senghor and advised he would like to start a new political party, to which Senghor agreed.

Abdoulaye Wade then founded the Senegalese Democratic Party (SDP). Although originally intending to be a labor party, the PDS adopted liberalism in 1976. There was a law that only permitted three parties to operate, and they all had to have distinctly different ideologies. As labor was taken by one of the other parties, it left liberalism as the option.

Wade’s first Presidential run was in 1978, but he only got about 17% of the vote. In late 1980, Senghor advised he was going to resign. Wade issued a statement disagreeing with the decision, and stated that a new election should take place, with supervision from the army. In 1983 and 1988, Wade came second in both elections.

Abdoulaye Wade was arrested after the 1988 election. There were protests about the results, and Abdoulaye Wade had been involved in the protests. He received a suspended sentence, and fled to France. He returned to Senegal in 1990.

Another election in early 1993 saw Abdoulaye Wade once again take second place. In May that same year, the Constitutional Council Vice-President was assassinated. Abdoulaye Wade was implicated in the murder, and he was charged later that year, along with his wife and two other PDF members, however, there was no punishment forthcoming. The charges were dropped in May, 1994.

There were further riots in 1994, and once again, Abdoulaye Wade was arrested. The charge was threatening state security.

Abdoulaye Wade became Minister of State again in March 1995, but left again in March 1998. He went to France for a year, and returned to Senegal late in 1999. In 2000, he ran a successful presidential campaign, and he became President in April, 2000.

One of Wade’s first tasks was to create a new constitution, and presidential terms were reduced from seven years to five years.

Abdoulaye Wade won his second term as President in 2007. The opposition parties didn’t accept the election results, but Wade ignored the trouble they tried to stir and kept going as President.

In 2012 Abdoulaye Wade ran for a third term. There were violent protests, but in the end, Abdoulaye Wade was defeated in the second round, by a wide margin. He received international praise from around the world for his handling of the defeat. He stepped down gracefully, and didn’t try to cause trouble for his successor. He is thought to be one of the few African leaders that were genuine in wanting a democracy.

Despite the praise,Abdoulaye Wade also received criticism on various fronts. He was accused of corruption, and also curtailing the free speech of the press. Another criticism was the excessive spending that took place.

Abdoulaye Wade was awarded Grand Officer of the Legion of Honour by France, and Grand Cross of the Order of Saint-Charles by Monaco.

Abdoulaye Wade married his wife, Viviane, in 1963. They had two children, a son called Karim, and a daughter called Sindjely.

Both children followed their father into politics.