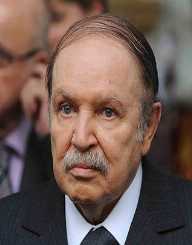 Abdelaziz Bouteflika was born on March 2, 1937, in Morocco, French protectorate of Oujda. He was the first child of his parents, but his father has a daughter from a previous marriage. Bouteflika has four brothers and three half-sisters. Bouteflika had to memorize the Qur’an at a young age. He got his education in local school in Oujda. As a student, Bouteflika had excellent grades. After finishing high school, Bouteflika joined the Algerian Liberation Army, and in 1960, he was assigned to lead the Malian Front in the south of Algeria.

After Algeria gained its independence in 1962, Bouteflika became a deputy in the Constituent Assembly, as well as the Minister for Youth and Sport. The government was at the time led by Ahmed Ben Bella. In 1963, Bouteflika became the Minister for Foreign Affairs. In 1965, Bouteflika joined a military coup that overthrew the government of Ben Bella. After the fall of the government, Bouteflika was assigned in a position as Minister of Foreign Affairs, a position in which he served until 1978. In 1974 and 1975, he served as the president of the United Nations General Assembly. In 1981, Bouteflika was involved in a major scandal when he was sued for stealing money from Algerian embassy between 1965 and 1979. He was found guilty of embezzling 60 million dinars. Bouteflika was given amnesty by President ChadliBendjedid and afterward got his diplomatic passport.

After president Boumedienne died in 1978, Bouteflika was seen as one of the possible candidates for the presidency. However, the military opted for the senior army colonel ChadliBendjedid. Bouteflika became the Minister of State. In 1989, Bouteflika went back to a position in the Central Committee during a time when the government was struggling with reforms. In 1992, the reform process of the country ended since the army took power and scrapped elections and wanted to bring the Islamic Salvation Front to power. This started a civil war in the country, which continued during the 1990s. He was offered presidency of the country but refused, and LiamineZeroual became the president instead.

In 1999, President Zeroual stepped down from his position, and Bouteflika decided to run for the presidency. He ran as an independent candidate but was widely supported by the military. He won the presidency with a 74% of votes. As president, he organized a referendum to restore peace and security in Algeria. He was active in international policies and 2000, served as the president of African Union. Since Bouteflika came to power, Algeria became active in African relations, as well as began to create relationships with the West. In 2004, Bouteflika was reelected as the President.

During his second term, Bouteflika held the Charter for Peace and National Reconciliation referendum, which aimed to end the civil war. He also set out a five-year plan- The Complementary Plan for Economic Growth Support. His plan included creating new housing and road infrastructure, as well as bringing down the external debt of the country.

In 2006, the prime minister set in motion plans to amend the constitution, to allow the president to run for office indefinitely. In 2008, the constitutional revisal was made. Bouteflika announced his candidacy in 2009 and won the election by 74% vote. In 2014, he ran for his fourth term.

In 2005, Bouteflika was admitted to hospital due to gastric ulcer hemorrhage. However, there were rumors that he had gastric cancer. In 2006, he was again admitted to the hospital, and in 2008, it was revealed that he is, in fact, suffering from stomach cancer. Since 2016, he has not been seen in public.