Virgo December 2017 Horoscope predicts that the planetary power is located in the Southern sector of the horoscope this month and the House of Family is dominant. Domestic issues and psychological matters will be more important than professional concerns for the Virgo zodiac.

You can visualize about the future of your career and make strategies to implement them when planets become favorable in future. Emotional strength is vital and you can concentrate your efforts on that aspect of life in December 2017.

The December 2017 astrological predictions forecast that more planets are in the Western half of the chart than in the Eastern half. This makes social skills more essential than independence and determination for the Virgo.

Situations for the Virgo will dictate the progress of your life and you will do well to allow things to happen at its own pace with the help of others. Teamwork and compromise are necessary and you have to be flexible to accept the views of others during the Mercury retrograde of December 2017. 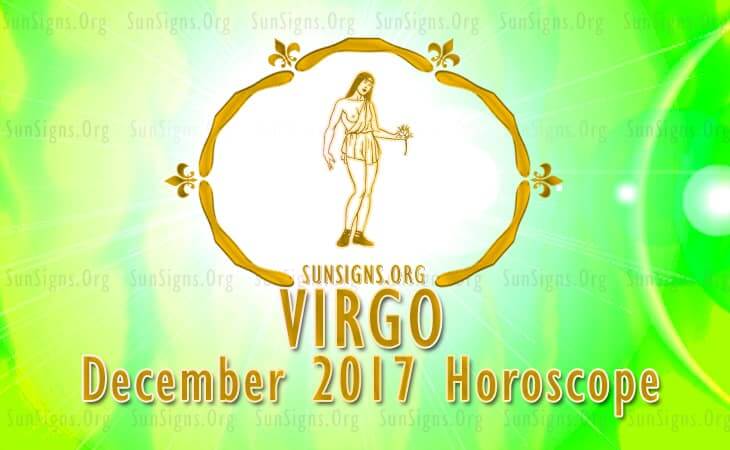 The December 2017 Virgo zodiac predicts that career and business is on the back burner for the time being, But the Moon will help sudden professional upswing after the mid of December 2017. The Virgins should be cautious about employment prospects and new business deals after the 24th of December 2017.

The sun sign 2017 horoscopes foretell that monetary situation is quite satisfactory in December 2017 for the Virgo star sign. Period up to the 15th is favorable for risky investments, and you will earn money while you are having fun.

Professional income will add to your finances after mid December 2017. Major financial dealings should be done before the 24th as planets are not helpful after that. The Virgo personality should be prudent in their spending habits in December 2017.

The 2017 monthly zodiac predictions forecast that love is active in December 2017 for the Virgo personality You have the strong influences of Venus and Jupiter for romance to flourish. However commitment appears to be a distant dream in your new relationships. If the Virgo compatibility is good in relationships, it can lead to marriage or pregnancy in December 2017.

The Virgo relationship with children will be excellent in December 2017. You will enjoy being a child yourself. The month will be full of enjoyment and is ideal for holiday travel. The Moon of the 13th of December 2017 will help you resolve the conflicts in your family and will bring happiness to family members.

The Virgo health will be fragile till the 21st of December 2017. Your focus should be on conserving your energy. Good emotional health is very much necessary and you should not be affected by normal ups and downs in life. Here are a few ways to de-clutter your mind.

The December 2017 Virgo horoscope forecasts this is a month to enjoy life and not make any important career or personal decisions.