Taurus December 2017 Horoscope foretells that majority of the planets are in the Northern half of the horoscope and the House of Career will become stronger after the second week of the month. Career growth will occupy your attention in December 2017. But the Taurus zodiac cannot ignore domestic and psychological issues altogether.

The December 2017 astrology predicts that planetary influences point to materialization of something on a grand scale. In this change over, the Taurus personality has to overcome many impediments. You will be able to achieve your ambitions if you are capable of handling the various aspects of your life successfully.

After the third week of December 2017, spirituality and overseas travel will be on the Taurus’ agenda. Various aspects of your life will be affected this month.

The 2017 December Mercury retrograde will deal with the real meaning of life and death and your finances. This month will bring clarity to spiritual and academic aspects of life for the Bulls. 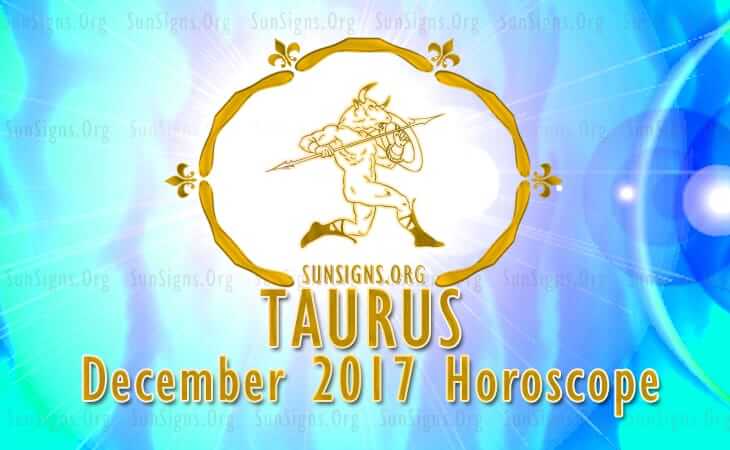 The 2017 yearly horoscope forecasts that career development will be excellent in December 2017 for the Taurus star sign. You will see the results of your hard work after the mid of the month. You can expect promotions and increments or fantastic business deals in December 2017.

The December 2017 Taurus monthly zodiac predictions suggest that planetary influences will result in enhancement of monetary prospects. You become richer by helping others to become more prosperous. Earnings will improve with proper financial management. All unnecessary expenses should be cut down and surplus money should be used to clear old debts in the month of December 2017.

Investments in government securities will be profitable for the Taureans in December 2017. You will have the generous support of your partner in your financial progress. Earnings can be improved by improving your self-image. Planetary influences in December 2017 will force you to think about great plans for making large sums of money.

The Taurus horoscope for December 2017 predicts that singles will have many opportunities for getting into romantic relationships. They will look for affluence in their partners.

Taurus compatibility with current partners will be gratifying and will be better during December 2017. You will come in contact with influential and wealthy people. Marital conflicts will be resolved in your favor and there are chances for pregnancy.

The Taurus health will get better in December 2017 and can be improved by regular walking and fitness exercises. Protect yourself from frostbite and seasonal effective disorder.

The December 2017 Taurus horoscope predicts that this will be a favorable month with progress in both your profession and love life.