Leo December 2017 Horoscope predicts that the planetary strength will be fluctuating between the Northern and Southern halves of the horoscope. Focus on career and family will be changing from time to time in December 2017.

Career will become important at times and family occupies your attention during other times. Career progress for the Leo zodiac should be based on feelings of happiness and comfort. You are more inclined towards domestic issues and psychological contentment in December 2017.

The 2017 December horoscope foretells that most of the planets are in the Western half of the chart towards the descendant sign. Hence social grace and adaptability are more important than autonomy and bold actions for the Leos. Other people and their interests come first, and you have to make necessary compromises. You have to flow with situations though it is against the basic Leo personality traits. 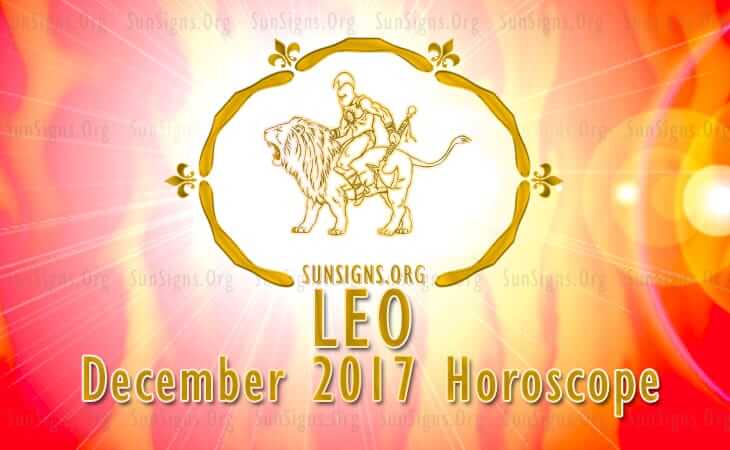 The horoscope 2017 forecast predicts that career for the Leo star sign will become important after the 21st of December 2017. You will be highly creative in your professional life. Lions looking for employment will get abundant openings in December 2017. But you need to analyze the prospects critically before accepting the offers.

The December 2017 astrology for Leo foretells that financial prosperity will be fabulous during this month with the influence of Mercury. Your financial intelligence will be excellent and you will be able to make sound decisions. If you are keen on risky investments, period after the 12th of December 2017 will be encouraging. Investments in travel related projects and finance will yield good returns after the 2017 Mercury Retrograde.

The 2017 monthly predictions forecast that money will be made from innovative techniques and also spent by the Leos on fun and entertainment. Money comes from various sources this month. Family too will be responsible for your earnings. Speculations and resourcefulness will create money after that. Your profession will provide you with money during the latter part of December 2017.

Leo, in December 2017 your focus will be on fun and entertainment. There will be plenty of partying till the 21st of the month. Love planets, Venus and Jupiter, will provide you with ample opportunities for love and romance. Read about the Leo compatibility.

If you are in a relationship already, it is likely to be confirmed and can even lead to a pregnancy. Single lions will find love in professional environment. Take your co-worker compatibility test.

The December 2017 horoscope for Leos shows that the presence of Saturn in Leo will make health issues more vital. Your priority on health matters will help you to improve your fitness and self-image. Depression symptoms need to be taken care of.

The December 2017 Leo horoscope forecasts that this is not a month to be dominant and aggressive as you need the support of others to prosper.