Aries December 2017 Horoscope foretells that the planetary power is located in the Northern half of the horoscope with majority of the planets there and the House of career is very robust.

Career will be in the center stage this month for the Aries zodiac. Domestic and emotional concerns are on the back burner in December 2017.

The 2017 December horoscope predicts that you will be interested in expanding your spiritual awareness through higher studies in philosophy and religion.

Your interest in foreign cultures and people may result in overseas travel. The Aries personality traits of being intellectual and communicative will get a boost through education in December 2017. 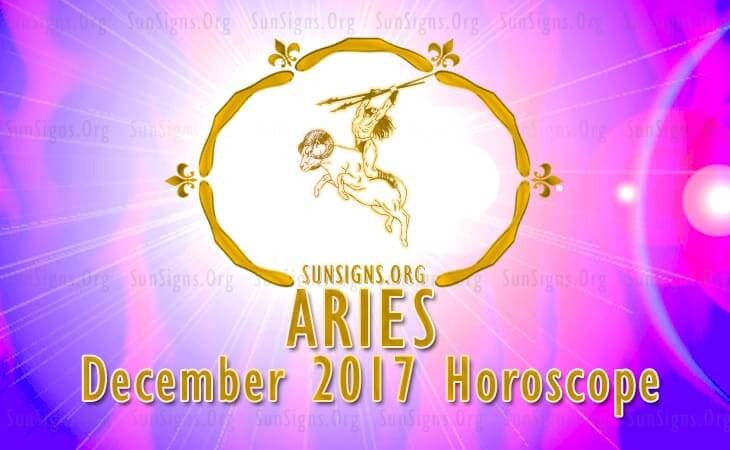 The 2017 astrology predictions for the Aries star sign foretell that career growth will be excellent with promotions and increase in emoluments. Your work will be appreciated and recognized by the superiors. You are aware of your career or business objectives and how to achieve them. Of course, hard work is necessary to get the desired results in the month of December 2017.

If you are an Arian seeking fresh employment in December 2017, you are likely to get employed overseas. You have bright prospects of being trained abroad in December 2017 which will improve your professional skills after the 2017 Mercury Retrograde.

The December 2017 Aries zodiac forecasts suggest that the beneficial influence of planet Mars and other planets will result in greater financial prosperity this month. You are more aggressive and poised to achieve your monetary objectives. Family is supportive of your fiscal ventures and your own expertise will help you to make money. You also have the encouragement of your friends and social contacts for monetary projects after the mid of December 2017.

Though the finances of the Aries’ partner are flourishing, there may be conflicts between you and your partner on monetary issues. Problems with authorities will get resolved easily this month. Property dealings will be a cause of concern for the rams in December 2017.

The Aries December monthly horoscopes 2017 predicts that romantic opportunities exist while you are pursuing your career or social activities. You will find love mates in your professional environment with colleagues and seniors. You will also find your love partners when dating online.

Intellectuals and highly communicative people will attract you as partners. You are looking for your own space in matters of love in December 2017. The Arians will have a problem on deciding the right partner in love till the last week of the month. Married couples too will be confused whether to have a child or not in December 2017.

The Aries health will be wonderful till in December 2017. Problems like irritable bowel syndrome and a persistent cough need to be looked into. And be sure to take proper care of your liver.

The December 2017 Aries horoscope predicts that this is a month for career and business while love and sex will take a backseat.