Aquarius December 2017 Horoscope forecasts that the planetary power is in the upper half of the horoscope this month and the House of Career is very dominant. Emphasis will be on career development and fulfilling outer ambitions for the Aquarius personality. You have to attend to the family requirements as and when the need arises in December 2017.

In December 2017, the planetary influences create many contradictions in various aspects of life for the Aquarians. You have to struggle hard to maintain the equilibrium between different areas because of the 2017 Mercury Retrograde effects. 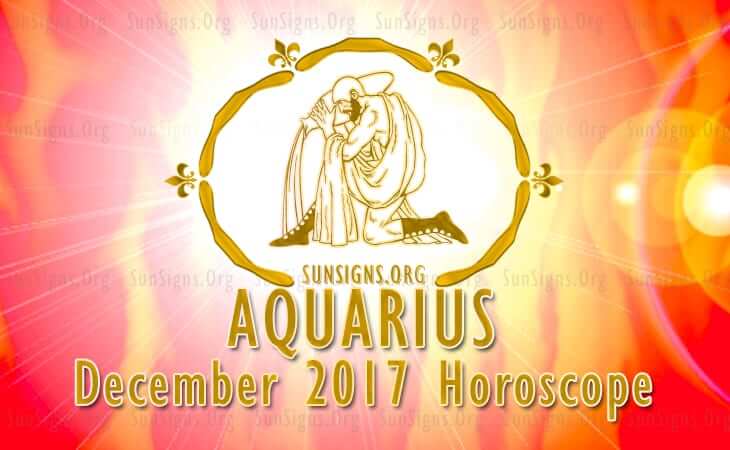 The December 2017 horoscope predicts that in addition to career, spirituality will be dominant this month. You have to imbibe spiritual values in whatever you do in life. Material values and spiritual aspirations for the Aquarius zodiac sign have to be in balance to achieve success in life. Though it looks tough, it is not that complicated.

The horoscope 2017 predicts that professionally the Aquarius native will be highly successful this month. Career and business expansion will be great. Social contacts play a major part in your success.

Career will get a boost because of the Aquarius personality’s involvement in spiritual activities. Your hard work will be recognized by your superiors and you will be rewarded with improvement in status and earnings in the month of December 2017.

The December 2017 Aquarius astrology predictions foretell that planet Neptune, your Financial Planet along with Uranus will provide you with prosperity. Money will be earned with bold financial actions and by taking calculated risks in December 2017.

The Aquarius December 2017 monthly horoscope also predicts that presence of Saturn in your House of love will induce some caution in matters of romance. You should allow love to blossom slowly. Even in marriages, be sure to understand your spouse. Planning for a child should be done after some thought.

Singles will find plenty of romantic opportunities this month. Love can be found in the social circles during partying and other social gatherings. Read more about dating an Aquarius. You will find romantic partners in spiritual environment such as conferences and religious functions too.

Love mates for the Aquarians are to be found doing philanthropic and social service activities in December 2017. Venus will add charm to your looks this month and you spend money on personal frills to look more alluring.

The 2017 December Aquarius zodiac predictions foretell that health will be much better this month with proper care. Health can be further improved by good exercise regimes. Get Aquarius fitness tips. Here are a few home remedies to remove facial hair and breast care.

The December 2017 Aquarius horoscope forecasts this is a month when you will have to practice temperance in all aspects of your life.