Sagittarius December 2016 Horoscope foretells that home and psychological issues will be more dominant. Inner happiness is more desirable than outer appearances and objectives, and you are striving towards that.

Independence and confidence are enhanced for the Sagittarians in December 2016. Mars will further strengthen this after the start of Mercury retrograde. You need to take the initiative to accomplish your goals rather than wait for opportunities to come your way. Your way is the best way and you have to put your efforts to make it happen. Sagittarians can be assertive and others will follow you.

December 2016 is ideal for indulgence and enjoyment for the Archers. You can invest in yourself by buying luxurious personal accessories. You can also go abroad and have a delightful vacation. 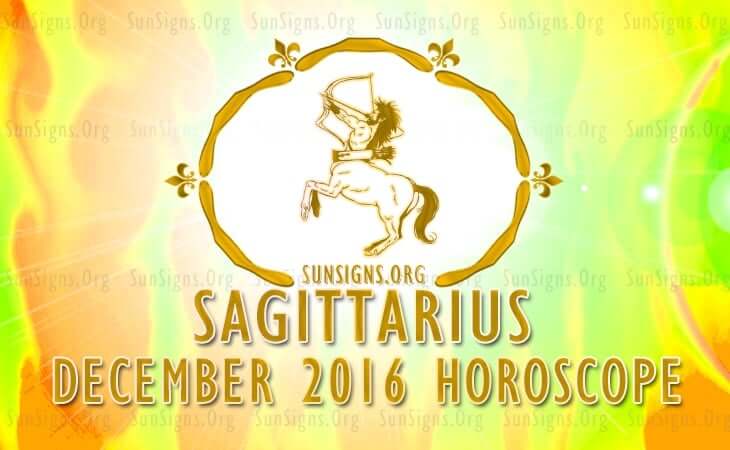 The 2016 astrology forecasts suggest that career will not be on the agenda of the Sagittarius born in December 2016.

However you will have abundant job openings and you have to be choosy about the profession you select. Work and business environment will be stressful this month.

Sagittarius, both Mercury and your financial planet Saturn are not benign this month. But flow of money is not affected. There may be holdups for cash flow and your actions may go awry in financial projects.

The monthly 2016 December zodiac forecasts predict that investments made by Sagttarius require more scrutiny if they have to be profitable. Speculative investments should be avoided during the last week of the month.

Love is chasing you in December 2016 as the Sagittarius sex appeal is attractive to others. There will be conflicts in your relationships as planetary influences are not beneficial for marriage dates or pregnancy. Strong partnerships will survive and become stronger. Married life for the Archers will be harmonious and your spouse will go all the way to make you happy.

Single Sagittarians will be looking for love in influential circles. Family members may behave in an unpredictable manner during the last week due to the influence of the eclipse. This will test your patience. You have to maintain your emotional stability to deal with tantrums of children in December 2016.

The December 2016 Sagittarius horoscope foretells that health will be outstanding this month provided you do not overindulge sexually. You will be more interested in personal charm and will work towards it after mid month. You might be even keen to try home remedies for skin care, removing wrinkles, acne and pimples.

To conclude, the Sagittarius forecasts for December 2016 predict that this is the month to go for that personal makeover and a spa vacation that you have long been planning for.