Pisces December 2016 Horoscope forecasts that majority of the planets are in the Northern sector of the horoscope towards the mid heaven sign.

The House of Career is active with more than 50 per cent of the planets in it. Profession is at the annual peak for the Pisceans and you are highly motivated to achieve your targets in your job.

Pisces, you have the freedom to follow your own course in life and have the strength to achieve the targets you have set. There is no need for flexibility and you can assert yourself. Hard work will be necessary more than social skills to accomplish your objectives in December 2016. 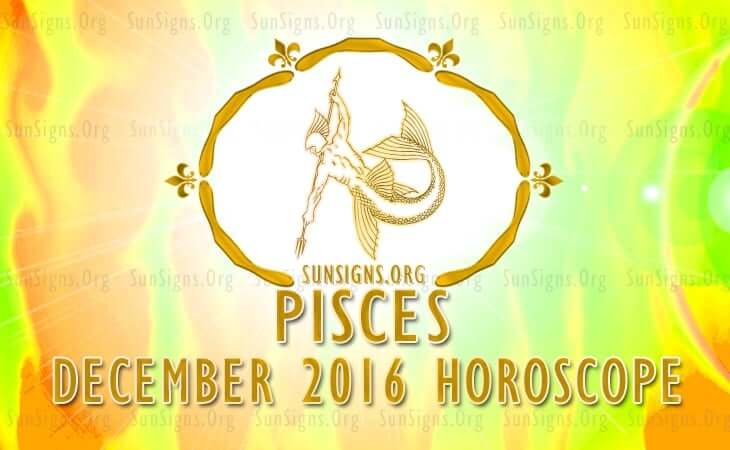 The 2016 December horoscope for Pisces zodiac sign predicts that professionally your position will improve radically and this will be achieved with extreme diligence. This may negatively impact your health. Planetary help is available for career growth and you will make the right decisions as and when required.

Overseas travel for professional purposes is indicated in December 2016 for the Fishes. Young people will be guided by the elders on deciding their careers. Your business could have an underlying spiritual meaning.

The Pisces astrology predictions for December 2016 foretell that money comes from overseas ventures or through foreigners. Career will bring in money from salary raises and rewards due to change in reputation and status. Dealings with government will be remunerative. You will have the support of your superiors and family members in your monetary efforts in December 2016.

In December 2016, love is intricate as Mercury is not supportive of your affairs till the fourth week. You are looking for personal freedom in relationships and you are not ready to compromise your liberty. Office environment will provide romantic opportunities, probably with superiors. (Read this article if your boss is your lover).

Love and romance for the Pisces born is also found while dating in socially powerful circles. Pisces sexual relationships will be low key this month. Pregnancy related news is indicated.

Pisces health will be delicate due to professional stress till the beginning of the Mercury retrograde. It will be sensible to take sufficient rest to maintain fitness. Health can be boosted by spiritual healing. You have to work smartly to reduce stress and gout related problems. Include cinnamon, ginger and lemon in your diet.

Overall, the Pisces 2016 horoscope foretells of a fortunate month but at the same time do not neglect your health.