Libra December 2016 Horoscope forecasts that planetary power is situated in the Southern half of the horoscope towards the nadir sign. Towards the month end the House of Family becomes stronger.

Family matters will take preference over professional concerns during the month of December 2016 for the Libra personality. You will strive to establish harmony in the family. There will be many social interactions.

In December 2016, majority of the planets are in the Eastern independent sector of the birth chart for the Librans. Personal effort pays off and there is no need for depending on others. You have to direct the course of action on the objectives decided earlier. You can assert yourself and change the course of things the way you want.

Travel and education will be in the center stage as more than 50 per cent of the planets are in the House of Communication for the Libra zodiac sign. You will get opportunities to expand your horizons through advanced studies in subjects of your interest. 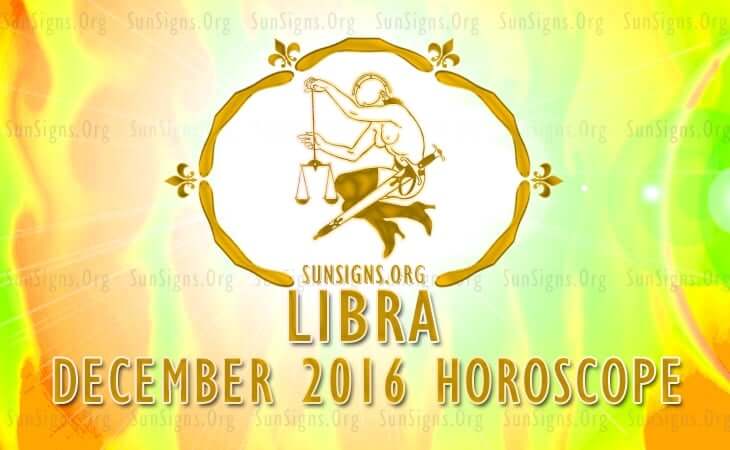 The Libra 2016 December astrology predictions forecast that this month you should divert your energies towards making future career plans.

Building a strong foundation for future business development is a must.

The 2016 monthly forecasts for the Libra birthday suggest that earnings will be good in December 2016. You have the assistance of your spouse or partner in your financial progress. Social contacts and personal image will be the other contributors.

Finances can be boosted by sales promotion and effective communication with clients. Things will improve towards the end of the month with planetary assistance. People in creative and academic environment will prosper in December 2016.

Libra, love is chasing you in December 2016 and you have a problem in forming relationships. Singles of the Scales sign will find love when engaged in monetary activities, or while they are involved in financial activities. You are looking for financial compatibility in your relationships till the month end.

Plan for a pregnancy, only if you are sure about your lover. The single Libran wants to date people with good intellectual and communication capabilities. Libra sexuality will play an important role in success of affairs. Family atmosphere will be volatile during this time due to the influence of eclipse.

Libra health is superb and can be improved with good sleep, regular exercise and relaxation. All excesses should be avoided to maintain fitness and avoid seasonal depression. Taking regular doses of apple cider vinegar, fish or olives will help in overall well being.

To conclude, the 2016 December Libra horoscope predicts a month to be spent with family which include vacations and holidays.