December 2016 Leo Horoscope foretells that the Lions are highly spirited and resourceful people. With more than 60 per cent of the planets in the 5th House, this month will be one of great revelry and enjoyment. You will be delighted to keep others also happy and amused.

In December 2016 emotional stability will be an important aspect for the Leo star sign. You will work hard towards inner happiness. This will lead to external contentment. Family issues will be on the radar and you should work toward harmony of the family. Career will take a secondary place for the Leos in December 2016.

Also, majority of the planets are located in the Western sector of the birth chart towards your ascendant sign, making December 2016 a socially important month. You have to seek the help of others to achieve your goals and allow things to happen. Compromises and team work will be necessary and personal ambition has to be controlled. 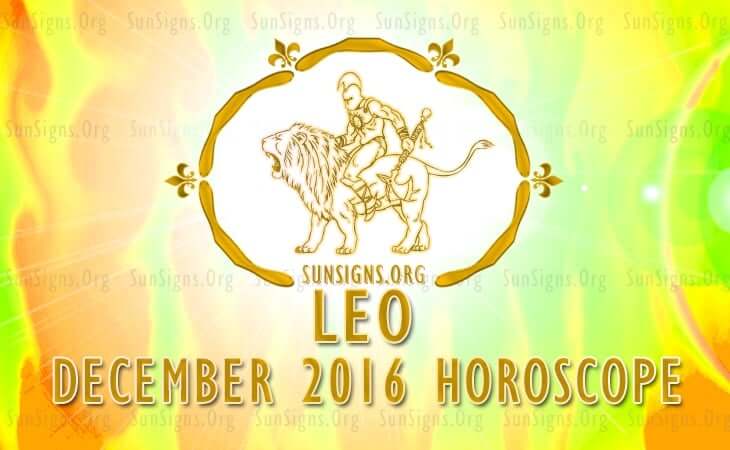 The December 2016 astrology forecasts for the Leos predict that professional openings come up while on the social scene. There will be more commitment to your work after the start of the Mercury retrograde. Leo born searching for jobs or planning to begin a new business will be successful towards the end of the month.

Monetary situation for the Leos will become problematic during December 2016. This time should be utilized for working out new financial plans which can be put into action at a later date. Speculative investments can be taken up towards the end of the month. Creative Lions will have a thriving month.

The December 2016 Leo love forecasts predict that love opportunities are plenty for singles this month. This will result in committed relationships or marriage.

Your social activities will be a hindrance to you existing love relationships. Sexual vitality will be robust and Leo women of child bearing age will be able to conceive easily.

The Leo December 2016 zodiac forecasts foretell that health will be superb throughout the month. More than 70 per cent of the planets are benevolent which will be reflected in your enhanced vitality. Lingering illnesses will vanish miraculously. You will take more interest in health by resorting to proper exercise and diet. Try to include green beans, lemon oil, curry leaves and fennel seeds in your food.