December 2016 Capricorn Horoscope forecasts that career issues will command over family and emotional aspects of life. Freewill and personal enterprise will dominate this month over social communication.

You have to make sure that you will not hurt others in this process. Capricorn, while being independent, you have to be tactful in your dealings with other people.

In December 2016 as more than 50 per cent of the planets are in your House of Spirituality, mysticism will play a powerful role this month in your life. You will be involved in religious activities and attend spiritual seminars and visit sacred places. Philanthropic causes will attract the sea goats and you may go to the extremes while spending on charities.

The December 2016 monthly horoscopes foretell that you will devote more time in understanding your true self and the real meaning of existence. Your intuition will be superb and you will get a preview of future happenings at every stage. 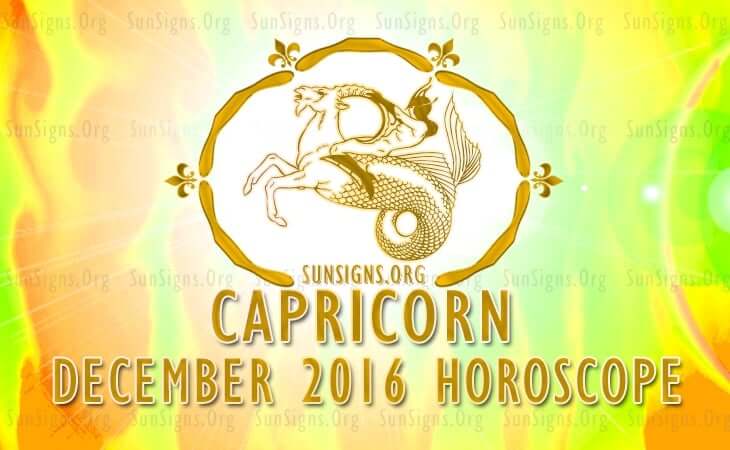 Professionally, the Capricorn born will be happy about the situation they are in during December 2016.

Your position and reputation has reached its zenith. You are still getting offers for better positions and there is scope for development in business.

The Capricorn December 2016 astrology predictions also warn that your excess attention for spirituality may seriously affect your monetary situation. In times of financial difficulties you tend to seek divine intervention.

The 2016 love horoscope foretells that spirituality will impact your prospects for love this month. You are looking for spiritual compatibility in your relationships. Love will be passionate for the Capricorn in the Mercury retrograde.

After all the spiritual highs you will come down to earth and start taking interest in your pleasures. This is a good month for the Capricorn in love to settle down or plan for a baby if married.

The Capricorn December 2016 zodiac forecasts suggest that your health will be exceptional this month. Planetary aspects are not favorable for making any drastic changes in your fitness and nourishment plans till the end of the month.

For most of the month, spiritual healing techniques will be very much effective. Existing illnesses will be cured miraculously for the Capricorn personality by home remedies and using health benefits of common ingredients found in every kitchen.

The 2016 Capricorn December horoscope predicts that career and health will be excellent this month.