December 2016 horoscope for Aries zodiac sign foretells that house of career will become dominant towards the month end. Career will be a priority and growth will be rapid in your professional field. Domestic and emotional concerns will not be in the radar for a while for the Arians.

Aries, social charm and skills are required to accomplish your goals in December 2016. You have to be flexible and seek other people’s help. Personal enterprise and confidence will not be of much assistance.

The astrology forecasts for 2016 predict that more than 50 percent of the planets are in the House of Spirituality and Education for the Aries personality. Your knowledge is enhanced by overseas travel and learning about foreigners and their culture. Your interest in spirituality will lead you to religious education and spiritual teachers. This will enlarge your perception of your inner strength and spiritual understanding about life.

In December 2016, more than 80 per cent of the planets are moving forward for the Aries star sign. This indicates rapid progress in life. You will accomplish your objectives extremely fast and things will change at breath taking speed. 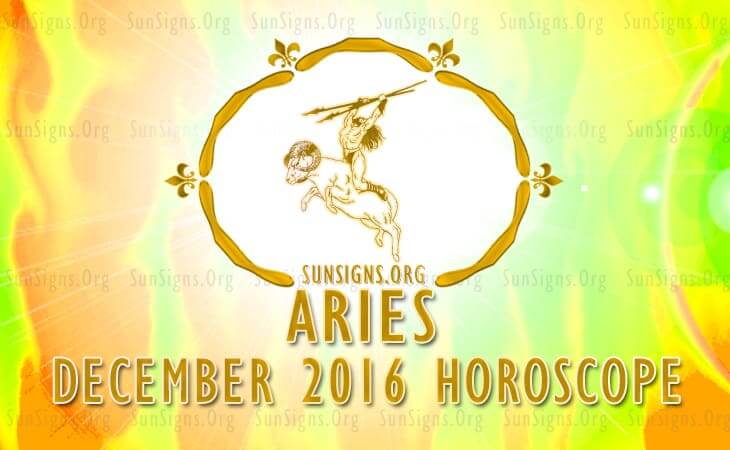 The monthly 2016 Aries predictions foretell that career is at its yearly high in December 2016. There will be very good opportunities for business development.

Aries earnings can be boosted in December 2016 by reducing unnecessary expenditure and this excess money can be used for clearing pending debts.

If you help others to grow financially, you will prosper indirectly. The Rams can venture into new monetary projects after mid month. Getting finance for new projects will be easier. Investments in speculative ventures will be profitable for the April born.

The 2016 romance and sex horoscope predicts that love is wonderful this month for the Aries and will be physical till the mid month. After that it will be more romantic and idealistic. Spirituality will enhance your marriage and love relationship. Going on a holiday with your spouse will be another way to make the relationship harmonious.

Single Arians will be looking for partners who can further career development. You are drawn to people who are committed to you for long term. Pregnancy and children related issues too will be on the cards in December 2016. Know more with the Chinese 2016 zodiac.

The 2016 Aries zodiac predictions suggest that your overall health will be superb all month. Engaging in too many activities may prove highly stressful and may affect your health. You should try to find some time to unwind in between the frenzied schedule. Be sure to use ingredients like lemon, garlic, ginger, onion and tamarind in your daily cooking.

To conclude, the Aries horoscope for December 2016 foretells that this is a month for spiritual activities and gaining more knowledge.