Aquarius December 2016 Horoscope forecasts that the house of career is powerful during the month for the Water Bearers. Job and business development will be robust and you will have the assistance of family members.


Your professional accomplishments will bring happiness to the family. Social contacts will support your career ambitions.

December 2016 will enable you to guide your life as per your own wishes. Personal enterprise dominates over social grace for the Aquarius born. You have the will-power to face the challenges without others help. However it will be prudent to get your friends support on your way to success during the Mercury Retrograde.

The House of Friends and Social activities is dominant throughout the month for the Aquarians. You will be active in social clubs and associations. More than sixty per cent of the planets are active in the 11th House. You will make new friends and will enjoy their company in traveling expeditions. 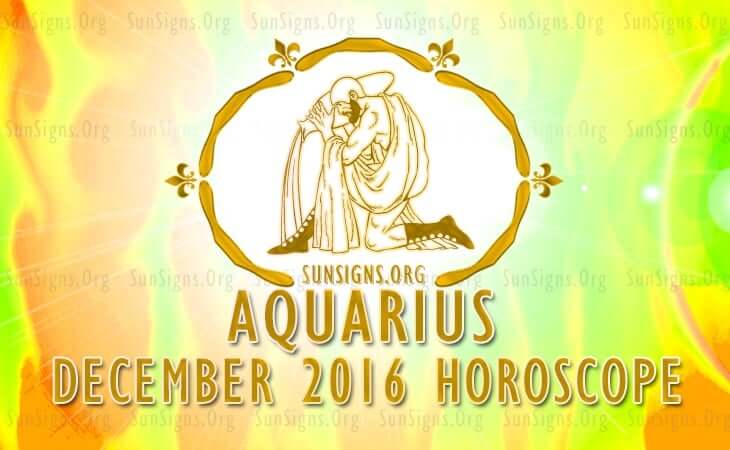 The 2016 astrology predictions for Aquarius zodiac sign forecasts that your work environment will be challenging and you will be successful in tackling these problems. In return your profession will bring you more recognition and monetary rewards.

Career development is amalgamated with spiritual standards. You will develop contacts with people of prestige and position which will further your business.

Expenses will overshoot earnings and you have to control them to remain in your budget. Your financial intelligence will be excellent.

Aquarius love is active this month in December 2016. Singles will have romantic opportunities in social gatherings and will have the support of friends. Love will be more idealistic even when you start dating one of your friends. Towards the end of the month, you will look for spiritually like-minded people.

Aquarians might find love at religious meetings or meditation centers. Spirituality will be a guiding factor in your overall life including sex and passion. Flings are on the cards but marriage and pregnancy might not prove to be fruitful.

The Aquarius health will be exceptional throughout December 2016. It can be improved further by taking care of your diet. Including low calorie foods in your diet is advisable. Also eat ghee, coconut, cashew nuts and tofu in moderate quantities.

To conclude, the 2016 December horoscope forecasts a month of socializing and good professional progress.