Virgo August 2017 Horoscope predicts that many of the planets are shifting to the Southern sector of the horoscope towards the mid heaven sign. By the end of August 2017 both the sectors are equally powerful. So both professional life and family issues require equal attention. Psychological strength is also necessary for the Virgins and will have to be enhanced in August 2017.

Virgo, planetary strength is situated in the Eastern half of the chart towards your rising sign. This is further enhanced by the forward movement of Mercury after the retrograde on the 16th of August 2017. This gives the Virgo sun sign extraordinary power for independent actions. You can design your own life as per your own specifications. There is no need to seek the help of others or compromise on your methods.

After the 23rd of August 2017, you will be more interested in indulging yourself in sensual pleasures. Presence of Venus in Virgo sign will help you to enhance your personal outlook and beauty. You will be interested in spiritual activities after the 10th of August 2017. You will engage yourself in charitable engagements and humanitarian service. Get your free Rashifal 2017 predictions. 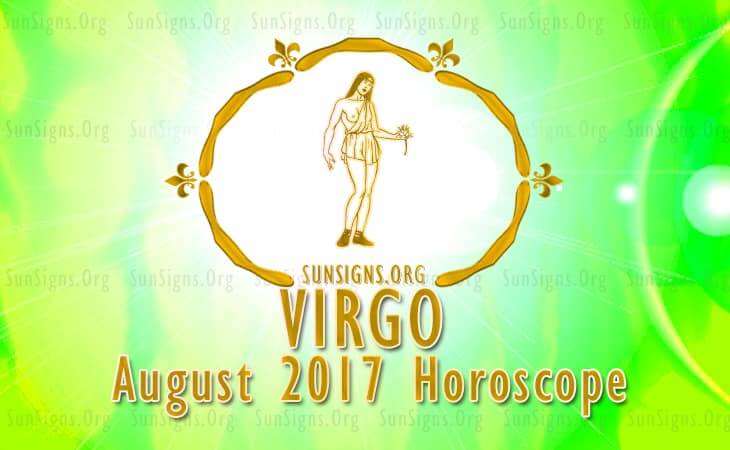 The August 2017 monthly astrological predictions for the Virgo personality foretell that this month career will take a back seat due to planetary influences. Use this month to plan your career or business and take it to the next level next month.

The horoscope 2017 predicts that the Virgo financial prosperity will be excellent this month. Monetary progress will be breath-taking. Presence of your financial planet Venus in your sign till the 17th ensures that money will be chasing you this month and you can earn money with ease in August 2017.

Combined effect of planet Jupiter and Venus will shower the Virgo born with more money, some of which are from unexpected sources. Investments in real estate and hospitality industry will be profitable. You have the support of family members for financial projects and you may invest in buying a new house in August 2017.

The August 2017 zodiac predictions for Virgo forecast that you will be able to attract partners for romance with your personal allure. Though there are plenty of partnerships, commitment will be lacking.

Existing partnerships need to be examined and necessary improvements have to be made to save relationships. Single Virgins who are engaged may have to change their ideas about love before getting into marriage. Children and pregnancy too need to planned with care in August 2017.

The Virgo health is fabulous this month in August 2017. You should concentrate on furthering your emotional health by practicing yoga and meditation. Health will improve further towards the end of the month.

The August 2017 Virgo horoscope predicts a month when analysis and proper assessment need to be done before making any major decision in life.