Taurus August 2017 Horoscope predicts that majority of the planets are in the Southern half of the horoscope and the House of Career is overshadowed by the House of Family. You will have to attend to your household problems and focus on maintaining harmony in your relationships in August 2017.

Taurus, most of the planets are in the Western sector in August 2017 towards the descendant sign. Hence you have to seek the assistance of others for attaining your goals in life. You have to go by consensus and there is no place for asserting yourself.

However the presence of Mars in Taurus will arm you with exactly opposite traits. The progress of the Taurus personality depends on how well you balance aggression and collaboration in August 2017. 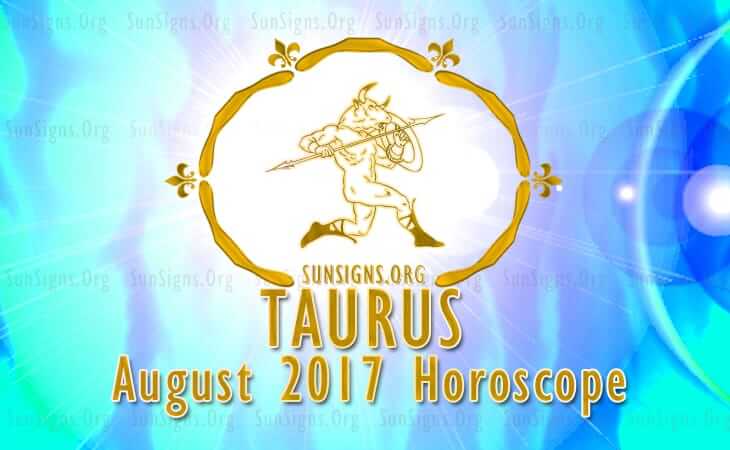 The zodiac signs 2017 predictions forecast that Taurus professional matters will be in the background this month. You will have enough time to formulate your plans for future growth and the ways to make your dreams come true.

Environment at the workplace will not be congenial for the bulls till the end of August 2017. If you are looking for a job, you will be successful after the mid of August month of 2017.

Mercury is retrograde in August 2017. It is advisable for the Taurus star sign to put on hold all major decisions regarding investments and procurements till the mid of the month. After that there will be clarity in your financial life. Money will have to be spent on household items this month.

Taurus, you will have enough money to clear old loans this month in August 2017. The monthly forecasts 2017 predict that money will come from different sources. You have the encouragement from family members for your fiscal projects.

The 2017 love and sex horoscope forecasts love will be wonderful till the 23rd of August 2017. Problems in relationships are likely after that due to the interference of family members. But they can be solved with mutual understanding and patience.

Children and pregnancy related issues will need some attention by the bulls in August 2017. Single Taureans might face some heart break if they are dumped by their lover.

The August 2017 horoscope for Taurus born shows health needs to be watched for most of the month. You are more interested in health and diet plans which will help you to maintain your physical well-being. Sportsmen and athletes will do well in their fields of excellence. You should attend to any minor problems promptly before it becomes serious with these simple home remedies.

The Taurus horoscope for August 2017 predicts that you will need to go slow this month and plan for the future.