Pisces August 2017 Horoscope predicts that the House of Others is dominant this month. The interest of others will come first and you have to accomplish things through collaboration and cooperation.

You cannot assert yourself over others and have to be flexible in your dealings with others. Pisces, you should move on with situations and hope that things will be to your advantage in the end in August 2017.

Majority of the planets will move to the upper half of the horoscope towards the midheaven sign by the 23rd of August 2017. Hence the Pisces zodiac sign have to attend to domestic issues till the 23rd and to professional matters after that. 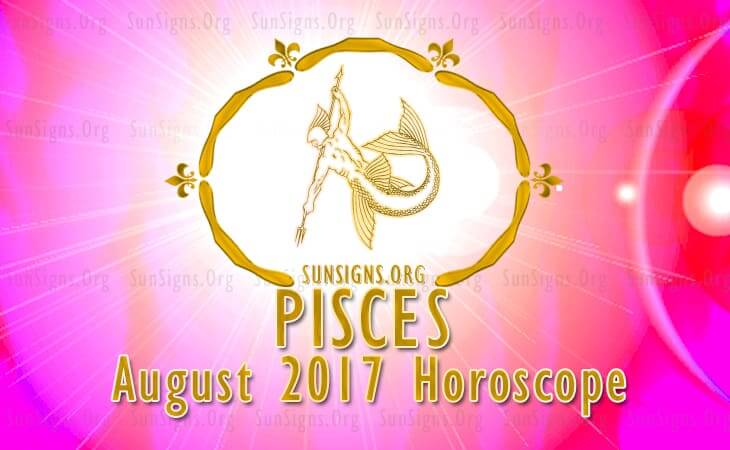 The 2017 year horoscope predictions forecast that there will be significant alterations in the corporate structure of the company the Pisceans are involved with. This will provide you with new career opportunities. You can further your business prospects by networking with people of influence in the corporate circle. Friends will support your career development in August 2017.

The August 2017 Pisces monthly astrology also foretells that monetary situation is quite promising, but requires more effort. Earnings will be improved by product promotion and advertisement of products. You can make money by helping others to succeed financially. Here are a few Feng Shui money tips.

Pisces, you have the support of your love partner in your fiscal ventures and your partner will also contribute to your earnings. Money is easily available for investment and you can use surplus money for clearing old loans in August 2017.

The 2017 August Pisces love predictions forecast that planetary aspects for love are not favorable till the 16th. Any important decision regarding Pisces compatibility in romantic relationships should be taken after that. By that time there will be clarity in the status of your partnerships. Only then should pregnancy related decisions be made. Single Pisceans will have abundant love opportunities this month and may even form committed relationships.

Romance for the Pisces sun sign is to be found in social parties, your office and through social contacts in August 2017. Your requirements in love will keep changing fast. It may be a means of entertainment or your need or pure love.

The Pisces horoscope for August 2017 predicts that health will be quite challenging this month. Your awareness about your fitness problems will mitigate the dangers to a large extent. You should look at different kinds of alternative therapies which will attend to the well-being of all the organs and will enhance your vitality. Detoxification of the body and good diet plans will be useful.

The August 2017 horoscope for Pisces star sign forecasts that the 2017 Mercury retrograde might change your outlook in life.