Libra August 2017 Horoscope predicts that there is a planetary movement to the Southern sector of the horoscope (mid-heaven sign) and this half will become more powerful after the 17th of the month. The Libra zodiac sign people have to juggle between outer ambitions and domestic welfare and psychological matters.

Libra, planetary strength remains in the Eastern half of the chart in your ascendant sign and your own sign is robust in August 2017. Self-assertion and confidence will give the results and you are not dependent on others. You should push through your plans with courage and overcome any obstacles on the way. There is no need for adaptation and compromise for the Libra person, predicts the August 2017 horoscope.

Libra, you will have a delightful month in August 2017 and you are not affected by planetary disturbances. Life with family members will be harmonious and the party will continue. Presence of Jupiter and Venus in your zodiac sign will ensure that you will be bestowed with the best of things in life. Opportunities for overseas travel come up this in this month of August. 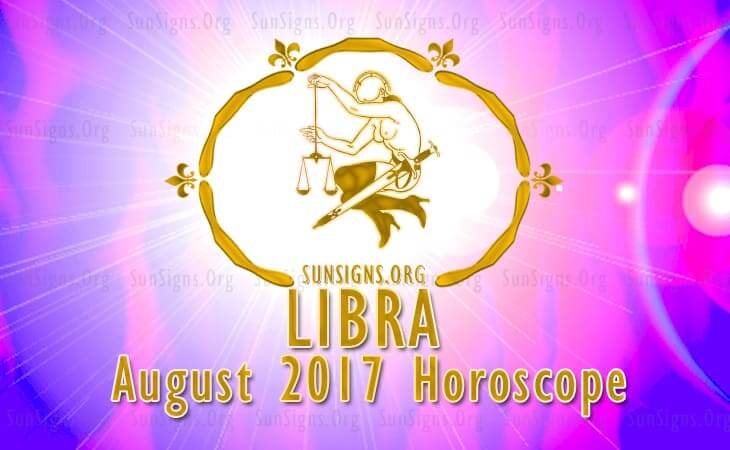 The 2017 astrology predictions forecast that career for the Libra sign will see many challenges in August 2017.

You have to work very hard to achieve your professional objectives. However this will bring in financial rewards too in August 2017.

The Libra August 2017 monthly horoscopes foretell that planetary aspects are beneficial for financial matters this month. Investments in speculations will prove profitable for the Libra personality. Your partner will be forced to work on financial ventures this month and has to put in lot of effort. New monetary openings to earn money will come up during the last week of August 2017 for people of the Scales sign.

Friends of the Libra sign will be a source of unnecessary financial tension. You may have to spend more money on your friends and social contacts. You can revive financial ventures which were kept aside earlier before the 2017 Mercury retrograde.

The 2017 love astrology forecasts predict that planetary aspects make love relationships more sexually physical than romantic for the Librans. You have to work towards bringing in a harmonious environment in the family. Make efforts to remove all the misunderstanding between members in August 2017.

The Libra horoscope for August 2017 foretells that health is excellent this month. You should take care to be balanced while enjoying life. Here are 5 ancient ways of healing and Rudraksh therapy that can give you instant relief for many ailments.

The August 2017 horoscope for Libra star sign predicts a harmonious family life with some challenges on the career front.