Leo August 2017 Horoscope foretells that the planetary power is located in the Eastern sector of the horoscope this month towards your ascendant sign. This is the right time to decide your priorities and act with persistence to achieve them.

There is no need for using your social charm or to take advice from others. The Leo sun sign can assert themselves and overcome all obstacles. Your way is the correct way and others will follow you.

Leo, your zodiac sign is hosting a number of planets this month in August 2017. This will present you with all types of sexual pleasures and your animal instinct will be strong. Read about Leo sexual traits. However the presence of Saturn will control your actions which will be subdued. 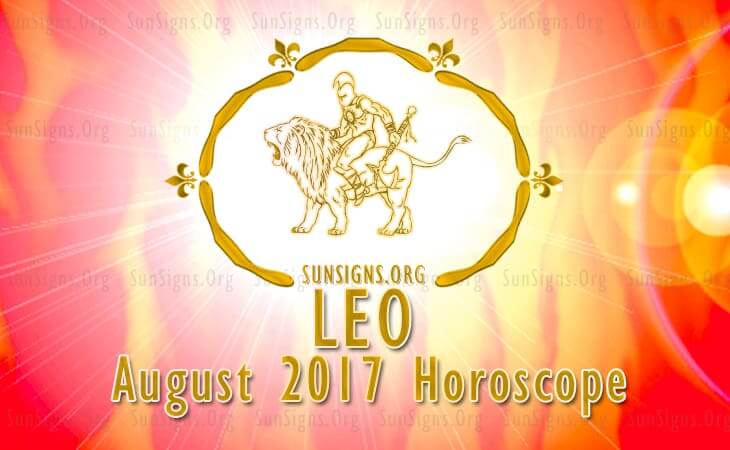 The astrology 2017 for the Leos shows that prospects of career progress are bright till the 17th of August 2017. You can expect promotions and monetary rewards. You have the support of family members and the management in your professional ventures.

Career of the Lions can be furthered by good public relations and marketing techniques. Family members are also highly successful in their professions in August 2017.

The August 2017 monthly zodiac Leo predictions forecast that planetary aspects are not favorable for finances this month due to the Mercury retrograde of August 2017. But even then, monetary situation is admirable for the Leos. You should try to delay large purchases and investments till the mid of August 2017. Your financial intelligence is strong and you should take major decisions without any fear.

Leo, the movement of planet Mercury will help you to earn money by different methods during the month. Your intuition will provide you with the methods to make money. Your personality and magnetism will attract money and you can resort to speculative ventures. Leo, you can earn money by providing financial advice to others too in August 2017.

In August 2017 the Leo personality will spend money on philanthropic activities and personal luxury items.

The Leo August 2017 monthly predictions forecast that planetary positions are not favorable for committed romantic partnerships this month. Until the 17th, you will find love while you are following your financial objectives.

Love is to be found in the vicinity of your residence and among known people. Academic environment will also provide love opportunities. Leos in committed marriages will start planning for a child. Read more about Leo compatibility.

The August 2017 for the Leo star sign predicts that your health will be wonderful and is further enhanced by your awareness of fitness and diet plans. You will have a good idea about your ideal body weight, body shape and body frame size.

The Leo horoscope for August 2017 foretells that career and love relationships will blossom this month while finances will be delayed.