Aries August 2017 Horoscope predicts that majority of the planets are in the Southern sector (mid heaven sign) of the horoscope this month. Career will take a back seat and the emphasis will be on domestic matters and emotional aspect of life for the Aries sun sign. You will get an opportunity to attend to the problems of the family and to enhance your emotional strength in August 2017.

Aries, planetary strength is located in the Western half of the chart (descendant sign) signifying that others will play a major role in your life. You can use your social charm and flexibility to achieve things. Autonomy and personal initiatives will not help in August 2017. Cooperation and partnership will prevail for the Rams this month.

Planetary aspects are excellent for the Aries personality to revel in life. You can amuse yourself by socializing and by taking pleasure holidays. The Mercury retrograde of August 2017 will give you all the time to understand yourself. 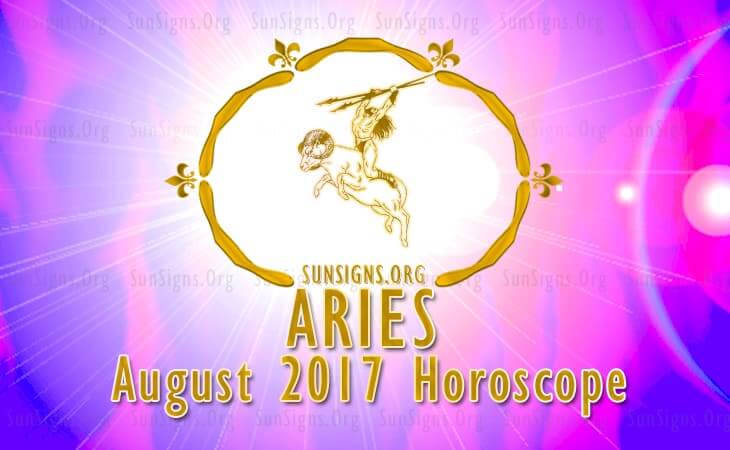 The zodiac 2017 predictions foretell that professional issues will occupy the Aries’ attention after the 23rd of August 2017. Work atmosphere will be enjoyable and your business will grow with the help of social connections made while you are partying.

People looking for employment or change of career will succeed after the 16th. Businessmen can hire new people too in August 2017.

The August 2017 Aries monthly astrology predicts that the monetary situation is good this month. Family members will help you to improve your earnings. There may be problems with your life partner who is closely associated with your monetary ventures. You will have to handle the situation diplomatically. You can indulge in risky investments till the 23rd of August 2017.

The Aries horoscope for August 2017 also forecasts that love is pleasant and you are looking for idealism in love until the mid of the month. Presence of planet Venus in the House of Marriage will be favorable for confirmed relationships and pregnancy.

You can choose a wedding date after the mid of August 2017. Aspects of Jupiter will favor Aries compatibility in new romantic relationships for the singles. This is not a good month for social networking and the existing friendships will face challenges.

The August 2017 horoscope for the Aries born predicts that health will be wonderful this month and your energy levels are admirable.You will have more pleasure induced strain after the 12th which you will be able to handle with your excess vitality. Avoid eating bread and opt for brown rice instead of white rice.

The August 2017 Aries horoscope forecasts that this is a good month for new relationships but you need to go slow on your career front.