August 2017 Aquarius Horoscope forecasts that the planetary strength has moved from the Southern sector of your horoscope (midheaven sign) to the Northern sector (nadir sign) during the end of last month. Hence career and outer ambitions will dominate over family and emotional matters for the Aquarians in August 2017. However the House of Family is also very active and you have to give equal importance for domestic affairs.

Aquarius, you can compile all your spiritual experiences and explore the practical feasibility of using them in your life in August 2017. Planetary aspects are not favorable for these exercises and you have to proceed with caution. You have to tread cautiously and avoid all confrontations in August 2017.

The 2017 astrology forecasts predict that Mercury is favorable for creative people in August 2017. It will help them produce works of artistic excellence. During the month they will cover various facets of life such as drama, emotion and criticism. 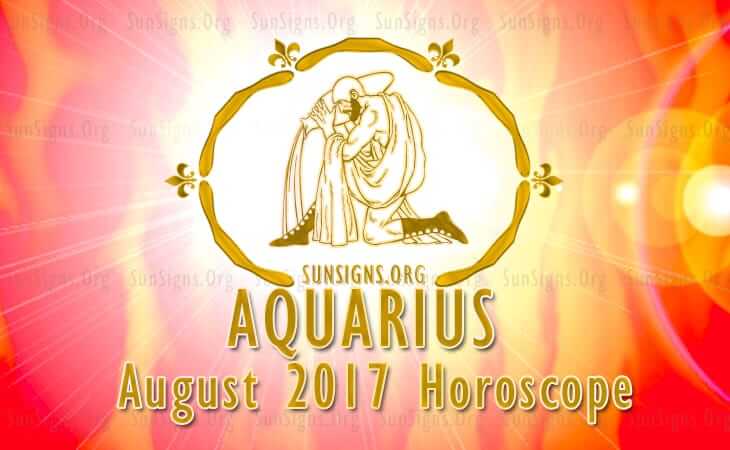 The August 2017 Aquarius monthly predictions suggest that this month you should implement the career plans you have thought about earlier. Professional development is excellent for the Aquarius sun sign.

You have the encouragement of family and friends in this progress. You will have plenty of job openings with the help of your social contacts. But they require more analysis before you accept them.

The Aquarius August 2017 monthly horoscope also forecasts that your earnings are up to the mark though the pace of financial growth is affected by the 2017 Mercury retrograde. This gives you an opportunity to review your monetary system completely and make necessary improvements in your plans and delivery system.

Aquarius, all your financial investments should be done after careful examination. You should not get into dubious transactions. Financial situation improves after the 23rd of August 2017. You can earn money by helping your partners to progress financially. Risky propositions will yield profits during the last week of month August 2017.

The 2017 love predictions forecast that the presence of Mars in the House of Family will affect your family life to a great extent this month. Family environment may be tempestuous with conflicts between family members. Your preoccupation with career may be a source of disturbance with your spouse. Planning of a pregnancy needs to be done with care. You should take care to balance your professional life with family life. The house may undergo maintenance and decorations. Free Feng Shui tips for your home.

Also, the influence of Saturn will slow down the progress of Aquarius love partnerships in August 2017. You will be looking for spiritual people as romantic partners. Love may be found in spiritual environment or while you are engaged in social service. You should allow love to bloom slowly. Your interest in spirituality may draw you to a spiritual retreat overseas in August 2017.

The Aquarius horoscope for August 2017 foretells that your health will be problematic till the 23rd of the month. You should attend to the important jobs and conserve your energy with enough relaxation and breaks. Health can be improved by changing your diet and exercise routines. Include cashew nuts, bitter gourd, fish food and milk in your diet.

The August 2017 horoscope for August 2017 predicts that career and professional aspirations will need to be balanced with a happy family life.