August 2016 Pisces horoscope predicts that Jupiter is moving forward indicating that career development will dominate over inner state and family issues. You have already made your career plans with a stable mind. Now you can convert them into realities with bold actions.

Planetary power is concentrated on the Western half of the horoscope for the March birthday people for the month of August 2016. Free will and independence will have to be kept away and social grace and charms will be required to attain your objectives in life.

The House of partnerships will become stronger towards the Mercury retrograde. So other people’s interests takes precedence over personal ambitions. Love and social activities will be excellent this month for the Fish. 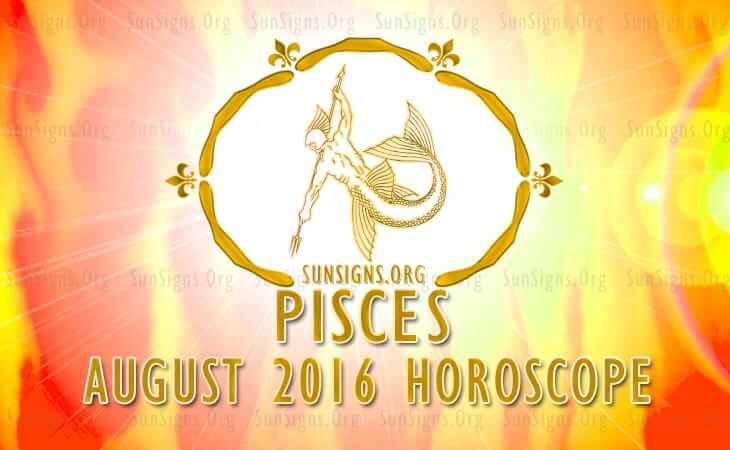 Be sure to make the most of this fortunate timing and build your career’s foundation. Do not be hasty and make wrong decisions in order to become successful faster.

The Pisces August 2016 astrology forecasts show that movement of your financial planet Mars into the 7th house indicates that you are getting into a business venture with others. Finances are more worrying after the 10th.

Monetary situation for the Pisces zodiac sign is dependent on your social contacts rather than personal efforts. You have to invest in social engagements more to promote your financial goals. Money invested in health related activities like alternative healing will give good returns.

The 2016 zodiac predictions suggest that love is wonderful this month and your self-assurance and discretion are magnificent. Present Pisces relationships will be reviewed and stronger ones will survive. You should make efforts to normalize your relationships with your love mate and friends. There should not be any acrimony between you and your partner; even if you are going for a break up.

Single Pisceans will form serious relationships in August 2016. Marriage and pregnancy is not advisable as planetary aspects are not favorable. There are plenty of romantic opportunities for singles that can lead to excellent sex. You may find romance at the place of work, in fitness centres or in social outings.

The monthly 2016 August predictions suggest that health for the Pisces will be excellent till the 23rd and requires more attention after that. You will experiment with various alternate methods of healing like natural bach flower remedies and rudraksh healing. Emotional health is important and you can boost it by having pleasant relationships with your family and friends. If health problems arise out of defective posture, it should be corrected promptly.

To conclude, the Pisces August 2016 foretells of an excellent month for job prospects and romance in the most unexpected places.