August 2016 Horoscope for Leo predicts that the planetary power is in the lower half of the horoscope towards the nadir sign. Personal achievements will take a back seat. The attention of the Leo personality will be on family and emotional issues for the month of August 2016.

Majority of the planets are in the Eastern half of the birth chart towards the descendant sign and several of them are in the zodiac sign of Leo itself. You will have unbridled vigor and personal allure. You will successfully negotiate the challenges to fulfill your accomplishments in 2016 August.

Various aspects of the Leo born’s life has to be harmonized and this will require ample vitality. You have to decide your objectives and work diligently to attain them. This requires prompt assessment followed up by correct actions. 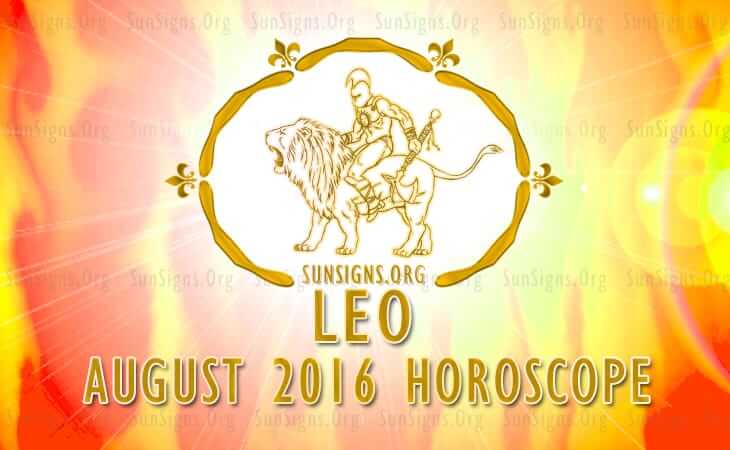 Leo birthday people looking for employment in August 2016 will have an easy and good month with plenty of opportunities coming their way.

Career development will be better after mid month. You are looking for emotional satisfaction in your professional and business life.

The Leo August 2016 astrology predictions foretell that this will be the most flourishing month financially. You are personally involved in guiding the course of your monetary goals. There is lot of vigor and concentration going into your money investments to make them profitable.

Planet Mars influences your actions and there is plenty of aggression and adventure in your financial strategies. You are indulging in risky investments and turning them into successful ventures.

Mercury retrograde is not favorable for Leo in August 2016 and this will retard the rate at which money is accumulated, though it does not reduce your income. There will be cash flow from unexpected sources and this will be abrupt. You have to be smart enough to adapt yourself to the changes in your financial plans.

Financial plans may take you abroad and you will interact with foreigners. You will be catering to customers from academic and travel areas.

Love is a bit complicated for the Lions in August 2016 because of your focus on finance and personal objectives. The Leo love 2016 forecasts suggest that if you are in a love relationship, it will require a reassessment.

You are distracted by new romantic dating opportunities in August 2016 and this will create misunderstanding in existing relationships. Pregnancy is better avoided at the moment. Married people will have conflicts with their spouses on monetary issues. You are splurging on personal luxuries and improving your personal outlook.

Leo fitness and health will be superb during 2016 August. You will be looking at alternate healing methods with a spiritual base. If you issues with ringing ears or itchy skin, take precautions right away.