Aquarius August 2016 Horoscope predicts that home affairs and emotional matters are not significant and the major attention should be on career. The Aquarians should make their outer goals succeed by hard work and imagination.

The 2016 astrology predictions personal enterprise and independence will not be of much help for the Aquarius star sign. Interests of other people should come first.

If you have to succeed, you should use your social charm and skills. Cooperation and collaboration with people is necessary. 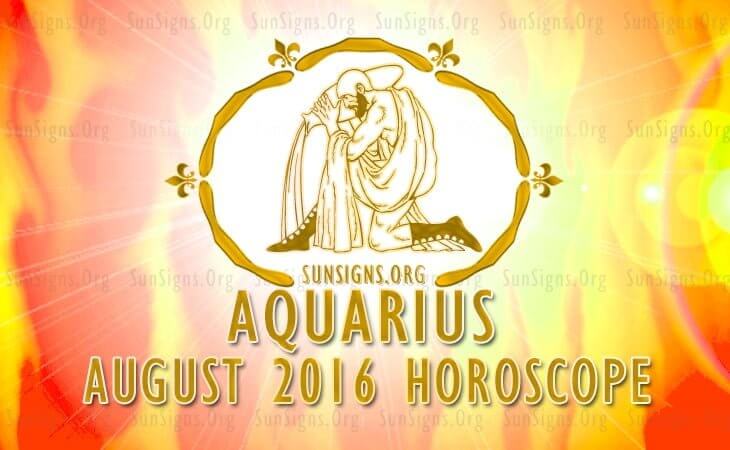 You are clear about your job and business prospects.

The Aquarius 2016 August monthly forecasts foretell that monetary situation will be quite challenging this month. You can overcome these with more effort and you will have the help of your planets for that.

You should use the surplus money to clear pending loans. You will be able to raise money for your business ventures easily. Planetary aspects will require that you have to put in more effort to make your financial targets successful.

The 2016 love horoscope predicts that love will be more passionate towards the end of the month for the Water Bearers. Before that it will be idealistic. Singles will have abundant romantic opportunities dating online. Maybe you will even fall in love with a rebel. Your spouse will be more affluent and will help your financial goals. This may involve plenty of business tours for the partner. Sex and pregnancy will also be on your mind.

The month end Mercury retrograde will make close relatives and neighbors unpredictable and they will test your tolerance limits. Existing relationships should be reviewed and corrective actions should be taken.

The 2016 Aquarius zodiac forecasts show that health will cause concerns till the 23rd and you have to be quite careful about it. Emotional stability will be a major factor in having good physical health. This can be enhanced by having pleasant relations with your spouse and other family members. Your vitality will be stronger this month with yoga and meditation. You can enhance your well-being by following a detoxification routine.

To conclude, 2016 Aquarius August Horoscope suggests improvement in professional life with a lot of emotional turmoil.