Pisces April 2018 Horoscope predicts that career, finance and spiritual values will dominate your life this month. Uranus is moving to the 12th House of Spiritual Wisdom and Charity this month. This will result in important modifications to spiritual and humanitarian values of Pisces zodiac sign.

You are moving over from present philanthropic organisations to new innovative ones. Pisces personality is seeking to find the scientific base behind spirituality.

The Solar Eclipse of the 29th will have an impact on various units dealing with communication such as computers and phones. Problems with this equipment will show up and Pisces born have to take corrective steps to keep them in working order.

April 2018 monthly horoscope for Pisces forecasts that your professional life will be zooming this month and this will be accompanied by public approbation. You will be left bemused with the number of career prospects and you have to hold your breath before you decide. The positive thing about this turmoil is the retrograde of Jupiter, which will calm you down a bit.

Astrology 2018 predictions foretell that financial progress is also sky-rocketing in addition to career. Money comes from all sources and from everywhere. You will get into a spending spree and put your money into assets and purchases. Financial instincts are at their zenith and you are able to take risks with audacity. Certain amount of caution will be necessary before you indulge in your investments and purchases.

The Lunar Eclipse of the 15th occurs in the House of Other People’s Money. This will affect the earnings of your partner who has to take corrective actions to rectify the defects in the financial strategies of the partner. Equation with investors will change resulting in new partners and there will be changes for the better in April 2018.

2018 monthly horoscope for Pisces foretells that life with your spouse or partner will be harmonious. You have an excellent charisma and look highly attractive.

Singles will find love in the neighbourhood. They are looking for partners who support their financial target till the 17th and after that they are keen on intellectual compatibility in April 2018. Read more in Pisces sexuality.

Health Horoscope is predicting wonderful health during the month. Spiritual health will be important. Presence of Neptune into your house may result in addiction to drugs or alcohol. These should be strictly avoided during the 2018 Mercury retrograde. 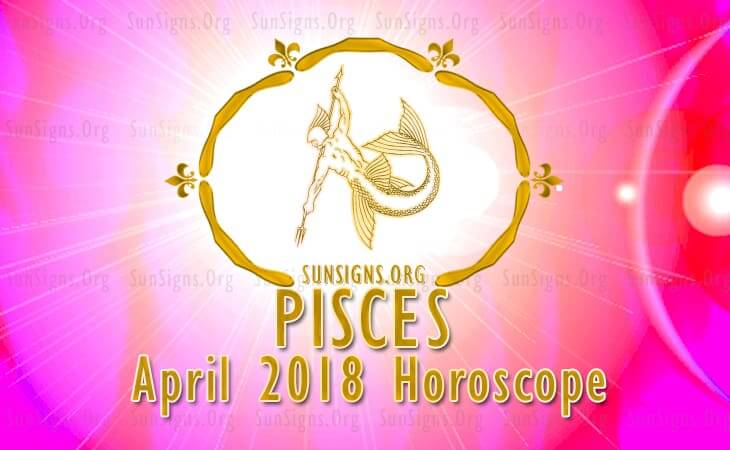 April 2018 horoscope for Pisces forecasts a fantastic month for Pisces and life will be zooming and enjoyable. You can see Love and Sex horoscope 2018.